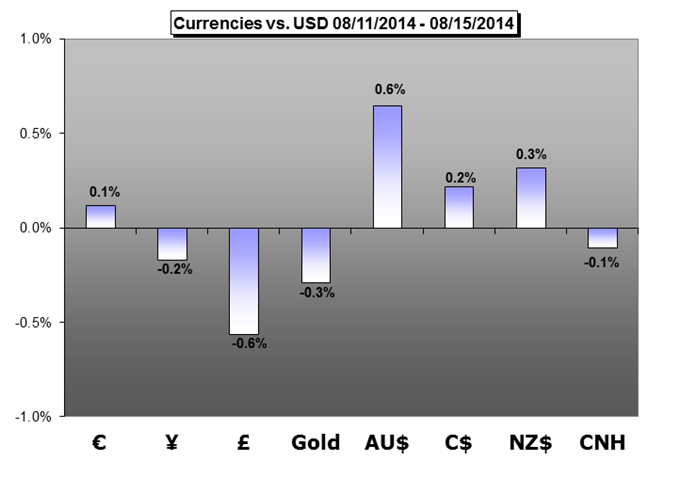 In the past month-and-a-half, the currency has reversed from a significant escalation of a bearish trend bearing and subsequently marked impressive gains. Yet, without fundamentals to support the move, the speculative drive can easily collapse on itself.

Euro’s Potential Capped as Regional Growth Grinds to a Halt

British Pound Heads into Critical Week - Could it Finally Bounce?

The British Pound fell for the sixth-consecutive week, matching its longest streak since setting key lows near $1.43 in 2010. Yet there are signs that the move may be overdone, and key data ahead promises big moves for the GBP.

USD/JPY Opening Monthly Range in Focus Ahead of Fed Symposium

The USD/JPY pared the decline from earlier this month, with the pair trading back above the 102.00 handle ahead of the Fed’s Economic Symposium in Jackson Hole, Wyoming, but the dollar-yen may continue to carve a string of lower-highs in August as it preserves the opening monthly range.

Over the coming week, the RBA’s August Meeting Minutes and the HSBC China Flash Manufacturing PMI data are the most noteworthy pieces of regional event risk for the Aussie. The Reserve Bank has held steadfast in its preference for a ‘period of stability’ for rates and the Minutes are unlikely to reveal any major revelations.

A relatively timid domestic calendar is led by second-quarter PPI figures. New Zealand price-growth data has increasingly underperformed relative to consensus forecasts since February, suggesting economists have tended to overestimate inflation and opening the door for a soft print.

Gold Rebounds Off Support on Rising Tensions in Ukraine- $1292 Key

Gold prices are softer at the close of trade this week with the precious metal off by 0.40% to trade at $1304 ahead of the New York close on Friday. With geopolitical tensions on the rise, gold could remain supported with key US data next week and the Jackson Hole Economic Symposium likely to drive prices.