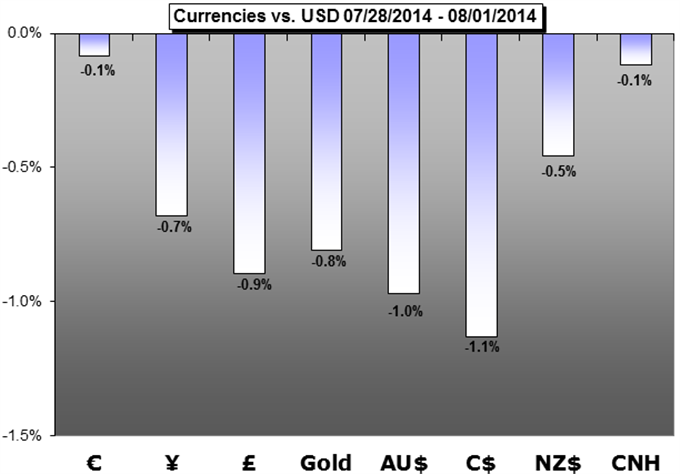 US Dollar Rally at the Mercy of Volatility, Interest Rate Trends

The Dow Jones FXCM Dollar Index (ticker = USDollar) mounted its biggest rally in six months this past week. Will US interest rate expectations finally hit the same stride that carried the Pound to seven-year highs? Are we on the brink of an all-out risk aversion move?

The ECB meeting this week, then, absent of any real action, will at least bring along with it a rather dovish slant from Governor Mario Draghi at the post-meeting press conference. The specter of QE will be fleshed out, but without any specific details that would indicate QE is due in the immediate future.

The British Pound tumbled further versus the US Dollar, and the sharp shift in momentum all but confirms that the GBPUSD likely topped and is likely to continue lower.

The USD/JPY broke out of the bearish trend from earlier this year as the Federal Open Market Committee (FOMC) scaled back its dovish tone for monetary policy, but the Bank of Japan (BoJ) interest rate decision on August 8 may boost the appeal of the Japanese Yen.

Gold prices are lower for a third consecutive week with the precious metal off by 0.90% to trade at $1295 ahead of the New York close on Friday. The losses mark a 2.47% decline for the month of July and come amid renewed strength in the greenback.

Australian Dollar May Bounce Before Selling Pressure Builds in Earnest

The Australian Dollar faced heavy selling pressure last week, with prices dropping through the bottom of a range that contained price action since the beginning of June.