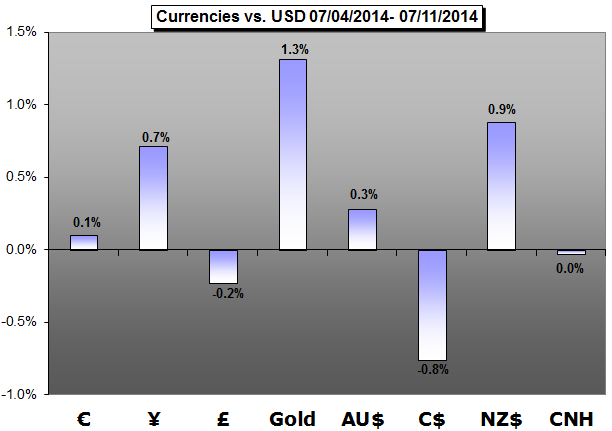 US Dollar Ready for Break…But Direction Awaits Volatility or Fed

The Dow Jones FXCM Dollar Index (Ticker = USDollar) continues tolinger conspicuously close to a level that has held the floor on the currency for the past 16 months.

Flashbacks of 2010-2012 Haunt the Euro but Systemic Issue Unlikely

Traders are refusing to offer the Euro lower on expectations of a revival of the Euro-Zone debt crisis. Forward guidance is working – it also means that market participants are complacent and only something truly shocking will release the market from its low volume, zombie-like state.

Last week’s BOE announcement proved to be a non-event, with Mark Carney and company leaving the setting of monetary policy unchanged and publishing no explanatory statement to lay out their reasoning going forward.

Gold Breaks Through July Range- Rally at Risk Ahead of Yellen

Gold prices are higher on the week with the precious metal up more than 1% to trade at $1335 ahead of the New York close on Friday. The advance marks the sixth consecutive weekly advance and comes on the back of a poor performance in broader equity markets and growing geopolitical tensions in the Middle East.

Japanese Yen Losses Remain Likely, but What Could Change?

The Japanese Yen finished the week marginally higher versus the US Dollar, but the fact that it trades near critical resistance (USDJPY at support) leaves it at risk. We’ll watch the coming week’s Bank of Japaninterest rate decision with special interest.

The NZD/USD remains at risk of marking fresh record-highs ahead of the next Reserve Bank of New Zealand (RBNZ) policy meeting on July 23 as the economic docket is expected to show heightening price pressures across the region.

The Australian Dollar may remain elevated over the coming week if RBA rhetoric fails to shift policy expectations amidst continued carry demand in a low vol. environment.