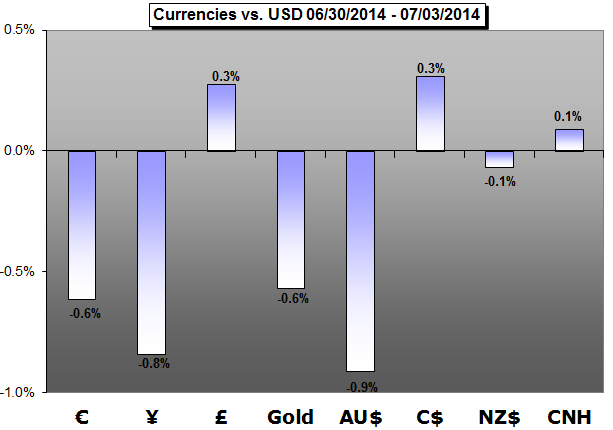 Article summary: The Dollar fell to fresh yearly lows but quickly bounced. Why might it continue higher, and which are the currency pairs to watch?

US Dollar Fails to Break Despite Stellar NFPs. Where are the Trades?

The Dollar tumbled to fresh yearly lows through the past week, but a late week reversal actually left the Dollar Index higher on the week. Is this the start of a more significant Dollar reversal?

The ECB’s ‘lower for longer’ stance is prohibitive for the Euro because the British Pound and the US Dollar are being bombarded with strong economic data and rising sovereign yields as a result, as market participants start to price in interest rate hikes from the Bank of England and the Federal Reserve, respectively.

The Bullish sentiment surrounding the British Pound should continue to gather pace through the second half of 2014 as the Bank of England looks to raise rates sooner than later. What are the risks?

The Australian Dollarmay be set for another turbulent week on a wealth of domestic economic data, while traders question the appeal of the Aussie carry trade.

Use the DailyFX-Plus Technical Analyzer to identify possible trade setups.

Learn forex trading with a free practice account and trading charts from FXCM.