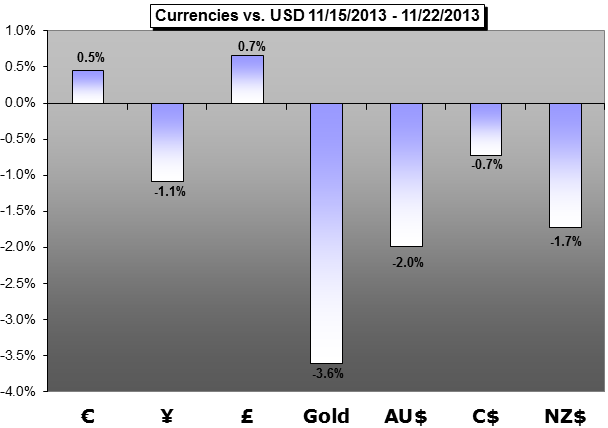 - Volatility might slow in the week ahead, but keep an eye on key event risk in Japan

- Have a strong opinion on the Dollar? Voice it through FXCM currency baskets

US Dollar Forecast - US Dollar Likely to Continue Higher, but Against Which Currencies?

The Dow Jones FXCM Dollar Index (ticker: USDOLLAR) rallied for its third week of the past four and finished near multi-month highs. A holiday-shortened week suggests the Dollar price action may slow, but why might the Greenback see big moves in the days ahead?

The Euro only scrapped together modest gains against the British Pound and the US Dollar this week, but a rotation out of the commodity currencies has helped buoy the single currency. This trend should continue.

The USDJPY rally may gather pace during the final week of November as the slowing recovery in Japan undermines the Bank of Japan’s (BoJ) pledge to achieve the 2% target for inflation by 2015.

Gold Price Forecast – Gold at 4-month Lows, But Can Sell-Off be Sustained?

Gold plummeted more than 3.5% this week with the precious metal trading at $1244 ahead of the New York close on Friday. But with the November close and a shortened week ahead, can the sell-off be sustained?

The Australian Dollar is at the mercy of risk sentiment trends in the week ahead as with US economic news-flow feeds continued Fed QE “taper” speculation.

Written by the DailyFX Research Team. To sign up for a weekly e-mail with our currency outlooks, go to our page for forex news delivered to your inbox.