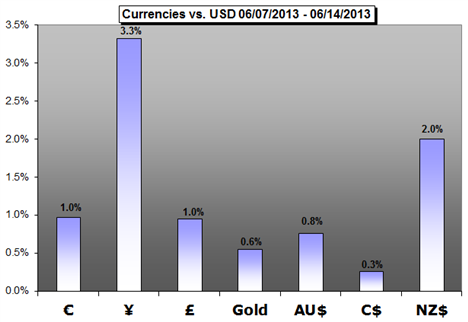 The Dow Jones FXCM Dollar (ticker = USDollar) endured a critical tumble this past week – a move that threatens to seismically alter a nine-month bull trend for the currency. Yet, both technical break and trend ambitions can be immediately reversed by one critical piece of event risk: the Federal Reserve’s June rate decision.

The Euro finished higher against the US Dollar for the fourth-consecutive trading week, good for its largest win streak since September and leaving it poised to test fresh peaks.

The Bank of Japan is firmly on hold despite recent volatility in Japanese financial instruments, which keeps the bull case for the Japanese Yen intact. Furthermore, with US Treasury yields set to fall and European peripheral yields set to rise, the Yen looks well-suited to gain further against the Euro and the US Dollar.

The British Pound extended the rebound carried over from the previous month, with the GBPUSD climbing to a fresh monthly high of 1.5736, and the sterling may continue to appreciate next week should the fundamental developments coming out of the U.K. further dampen speculation for additional monetary support.

Gold crept higher this week with the precious metal posting a modest advance of just 0.36% to trade at $1387 at the close of trade in New York on Friday. Bullion price action has remained rather subdued despite the wide spread volatility seen in FX and broader equity markets with prices continuing to hold steadily below the $1400-threshold. All eyes now turn to key event risk next week as prices continue to coil into a clearly defined range.

Use the DailyFX-Plus Technical Analyzer to identify possible trade setups.