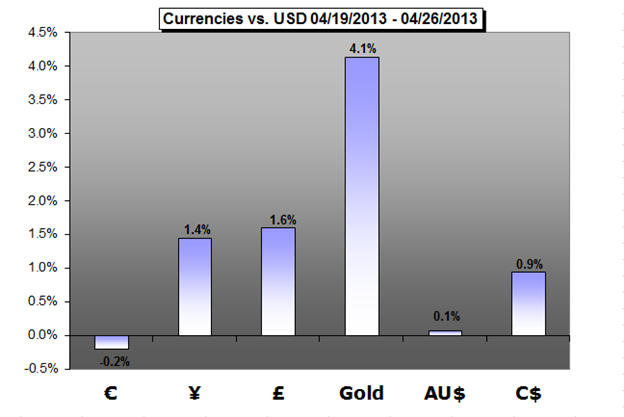 Tired of Choppy Dollar Moves? The Coming Week Could be Huge

The US Dollar (ticker: USDOLLAR) rallied to start the week as the Euro initially fell to multi-week lows, but a sharp reversal left the safe-haven currency lower as the US S&P 500 finished just shy of record peaks.

There is a laundry list of fundamental landmines for euro traders to watch moving forward – and that means volatility and even trend development should be expected for EURUSD and other crosses. At the top of the list is the ECB rate decision.

The British Pound rallied to a fresh monthly high of 1.5497 as the U.K. emerged from the double-dip recession, and the sterling may track higher ahead of the next Bank of England (BoE) interest rate decision on May 9 as market participants scale back bets for more quantitative easing.

The Australian Dollar looks vulnerable to deeper losses amid mounting RBA rate cut bets and returning risk aversion on the back of global slowdown fears.

Gold Still Bearish below $1504- Rebound at Risk Ahead of FOMC, NFPs

The gold rebound gathered pace this week with the precious metal advancing more than 4% to trade at $1462 at the close of trade in New York on Friday.

Canadian Dollar To Consolidate Ahead of GDP Report

The Canadian dollar strengthened this week against its U.S. counterpart on an improved economic outlook in the U.K. and U.S. Britain managed to avoid a triple-dip recession, recording a positive growth rate in the first quarter.