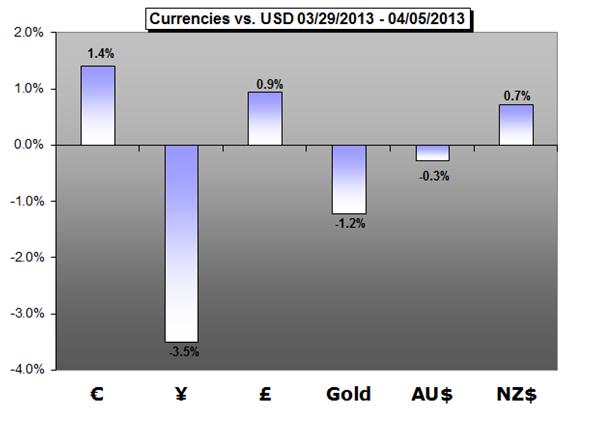 The dollar’s performance this past week was something of a mixed bag given the heavy fundamental crosswinds from other central bank decisions.

The Euro finished the week strong, posting a massive gain of +4.70% against the Japanese Yen, while adding a less but still commendable +1.32% against the US Dollar.

What a week for the Japanese Yen. The JPY traded to fresh monthly highs ahead of the heavily-anticipated Bank of Japan rate decision, but a shocking BOJ result forced the USDJPY to its biggest two-day surge since the heights of the financial crisis in 2008.

The British Pound broke out of the range carried over from the previous week, with the GBPUSD climbing to a fresh monthly high of 1.5362, and the sterling may continue to retrace the sharp decline from earlier this year as the Bank of England (BoE) maintains a neutral stance for monetary policy.

Gold is softer at the close of trade this week with the precious metal off by nearly 1.5% to trade at $1573 in New York on Friday. Price action this week saw a surge in volatility with bullion testing the critical support range between $1550- $1555 noted last week.

Australian Dollar volatility was relatively subdued last week compared to the other major currencies but a pickup in activity seems likely.

The New Zealand Dollar gained for the fourth consecutive week, rallying by 0.8 percent against the Greenback from a week ago.