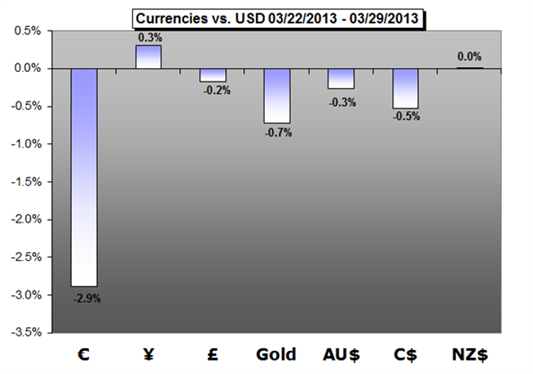 The US Dollar finished the month of March almost exactly where it began, but an impressive Q1 of 2013 suggests the Dow Jones FXCM Dollar Index (ticker: USDollar) could continue to fresh multi-year peaks as we enter the start of the second quarter on a critical week of forex market event risk.

The Euro has been seriously fundamentally shaken these past few trading weeks as the Cyprus crisis unfolded. Now with harsh capital controls implemented and an imminent financial collapse (or Euro member exit) adverted, some industrious traders expect the shared currency to immediately recover lost ground.

The Japanese Yen was a top performer this week, surging by over +1.60% against the Euro, while adding a mere +0.30% against the US Dollar.

The British Pound dropped from a week earlier on Friday due to a combination of threats to UK fundamentals: fourth quarter GDP was confirmed to contract, the nation’s current account fell short of expectations, and finally the Bank of England announced that major banks must raise at least 25 billion pounds by the end of 2013 in order to cover potential losses.

Gold was weaker at the close of trade this week as prices pulled back from interim resistance noted in last week’s forecast, with the precious metal off by 0.82% to trade at $1595 as of Thursday afternoon.

The Reserve Bank of Australia returns to the spotlight in the week ahead. Economists expect the RBA to keep the benchmark interest rate unchanged at 3 percent. The markets seem to agree, with data compiled by Credit Suisse showing traders are pricing in a mere 8 percent probability of a 25 basis point reduction.