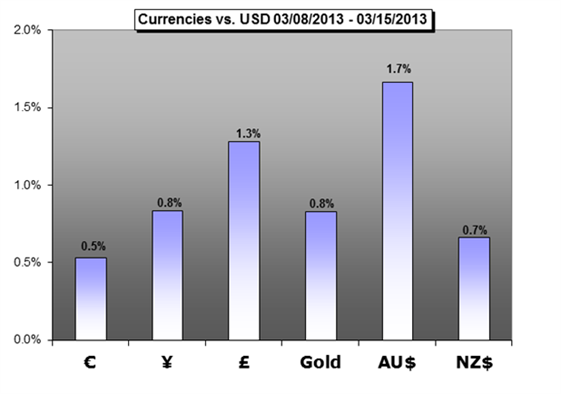 What Goes Up Must Come Down - Dollar Looks Due Pre-FOMC

No markets move in a straight line, and the Dow Jones FXCM Dollar Index (ticker: USDollar) fell for the first week in eight as its winning streak inevitably came to an end.

Euro Limited by Deteriorating Economics, but Soft Dollar Could Offset

The Euro was the second worst performing major this past week, adding a mere +0.54% against the exceptionally weak US Dollar, although the Euro’s weakness should not be overstated; it only depreciated by -1.14% against the top Australian Dollar.

Japanese Yen Counting Down the Days to Massive Stimulus

Having dropped nearly 2,000 pips and 25 percent, the Japanese yen has finally seen one of its key fundamental milestones met: a change in leadership at the Bank of Japan (BoJ) that is focused on significantly leveraging stimulus.

The British Pound snapped back from a fresh yearly low of 1.4830 and the GBPUSD remains poised to track higher in the coming days should the Bank of England (BoE) talk down speculation for more quantitative easing.

Gold Advance at Risk Amid FOMC Policy- $1600 Remains in Focus

Our expectations noted in last week’s forecast have come to fruition with gold mounting the $1585 resistance level early in the week, taking bullion prices up by 0.86% to close at $1592 in New York on Friday.

The New Zealand Dollar fell sharply on Thursday as the Reserve Bank of New Zealand decided to hold its benchmark rate unchanged at a record low 2.5 percent for a 16th straight meeting. Warnings over a potential rate cut on an overvalued currency intensified the sell-off.