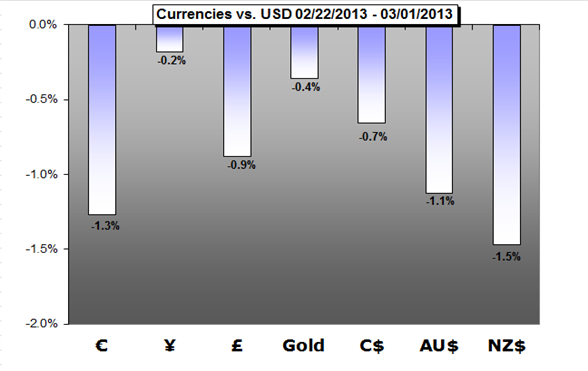 US Dollar Surges, but Coming Week Will Tell us if it Continues Higher

The US Dollar surged as markets turned volatile following Italian elections, pushing the Dow Jones FXCM Dollar Index (ticker: USDOLLAR) to its highest in over two years and its biggest single-week advance in sixth months.

Euro Traders Should be Nervous of What the ECB Will Do

Like many of its largest counterparts, the Euro is at a critical fundamental fork in the road. On the one hand, there is a tangible – though somewhat passive – bullish driver to be found in the European Central Bank’s (ECB) passive stimulus reduction.

The Japanese Yen was the second best performer this week, trailing only the US Dollar by -0.18%, while posting ‘rebound’ gains against the rest of the majors, especially the Australian and New Zealand Dollars, and the Euro.

The British Pound tumbled to a fresh yearly low of 1.4984 amid the heightening threat for a triple-dip recession in the U.K., and the sterling may face additional losses in the week ahead should the Bank of England (BoE) show a greater willingness to ease monetary policy further.

The Canadian dollar weakened to its lowest level in eight months amid concerns on the slowing growth in the real Canadian economy. According to a report released by Statistics Canada, domestic GDP rose 0.6 percent in fourth quarter, the lowest since second quarter of 2011.

Canadian Dollar At Risk Ahead of Bank of Canada, Employment Report

Gold prices were softer at the close of trade this week with the precious metal off by 0.37% in New York on Friday to close at $1575. The losses come despite a near 2.5% rally early in the week that took bullion briefly above the $1600 threshold before pulling back sharply.

The outlook for the Australian Dollar is clouded as traders weigh conflicting cues on the direction of monetary policy ahead of next week’s RBA announcement.