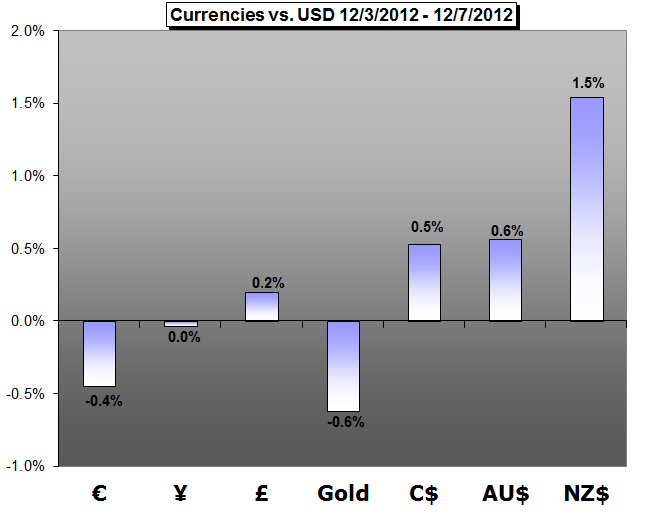 Dollar Will Struggle to Climb with Fed, Fiscal Cliff Ahead

- The dollar’s performance this past week – like the broader capital and FX markets – was uneven. Nevertheless, the first three-day rally from the Dow Jones FXCM Dollar Index (ticker = USDollar) in three weeks and an impressive reversal from the benchmark EURUSD have called traders attention for what could happen over the coming week.

- The Euro was looking strong in the early part of the week, rising back above 1.3100 against the US Dollar as progress on the US fiscal cliff/slope soothed near-term investors’ anxiety. But by mid-week, the Euro’s fortunes were very much changed. With an inconclusive docket for the coming week, with a decision on Greece’s aid tranche on Thursday, with Spain beginning to flirt with a bailout request, and with the European Central Bank’s policy meeting results all likely to influence the 17-nation single currency, we must maintain a “neutral” bias on the Euro.

- The British Pound continued to retrace the decline from back in September as the Bank of England (BoE) maintained its current policy stance in December, and the short-term rebound in the GBPUSD may gather pace over the remainder of the year as the central bank appears to be slowly moving away from its easing cycle.

- Later in the week, larger risk trends come into focus. Prices continue to show a significant correlation with the S&P 500 – a proxy for market-wide sentiment trends – exposing the Aussie to a busy docket of event risk. A series of Eurozone summits keeps the debt crisis in the headlines. This month’s sit-down has long been billed as the time for final agreements to emerge after months of haggling, meaning traders will look for game-changing headlines to emerge. If the summit fizzles once again, risk sentiment is likely to suffer and punish the Australian Dollar in the process.

- Gold was off by 0.64% this week with the precious metal closing at just shy of $1704 in New York on Friday. The move comes amid a volatile week filled with event risk as central bank decisions from Australia, New Zealand, Canada, the UK and the Eurozone kept traders on their toes. An interest cut from of the RBA, a downgrade Eurozone growth projections from of the ECB, a rather misleading and However, with gold posting its second weekly decline off the August highs, is the metal poised for further losses?

The US dollar (ticker = USDollar) ended another week relatively unchanged against major counterparts, even with a significant NFP report. Large-ticket items are on this week's docket as well, highlighted by the final FOMC meeting and press conference by Chairman Bernanke on Wednesday. However, the slow end-of-year drain of volume from the markets may result in another week of daily moves, but no ground gained at the end of Friday.