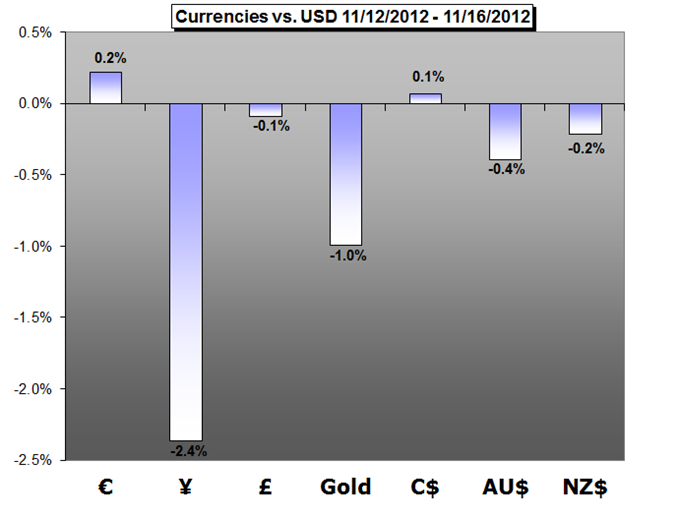 - The US Dollar has finally reached above 10,000, helped mostly by a weakening yen and to a lesser extent by risk aversion. As markets enter the holiday season with a shortened trading week due to the Thanksgiving holidays, the US dollar may likely be influenced by external forces this week while the fiscal cliff deadline looms.

- Despite sharp drops in the equity markets this week, the base currency of the world's most liquid pair remarkably held and gained agains the greenback. Even with a delay in redeeming bonds due on November 16th, Greece will likely recieve its next tranche of bailout funds totalling EUR 31.5 billion as Euro-area finance ministers meet this Tuesday. As the fiscal problem is delayed once again, the solution to the immediate problem could result in a stronger Euro.

- Despite rounds of better economic data published for August due to the Olympic games, the coming week will bring the final rounds of those data, notably the Bank of England minutes. However, the better data may be a short term solution as Governor Mervyn King noted the temporary effects of the games. As a result, the pound may once again have to follow in the shadows of Eurozone developments.

Japanese Yen To Look Past BoJ- December Election In Focus

- The Japanese Yen led a forceful rally back above 81.000 on political developments this week. As current PM Yoshihiko Noda called for elections on December 16th, opposition leader Shinzo Abe called for unlimited spending in order to bring the economy back after more than two decades of economic decline. However as the remarks are unlikely to bring reforms due to an adamant BoJ and as the pair runs into a confluence of technical resistances, the late-week rally may lose steam as traders enter next week.

- The Australian Dollar may take a backseat this week after a relatively uninspiring performance. As the domestic economy continues to lose steam, developments in Europe and the United States are expected to heavily influence this pair. With November RBA minutes being the only major event for the Aussie, the currency may once again end in the middle of the pack.

- Gold drifted lower this week, keeping its risk correlation similar to the US equity indices. However, its performance could be said as unique, not following any major currency pair. Over the next week, the yellow metal is expected to be heavily swayed by Fedspeak, including a speech by Chairman Bernanke on Tuesday and the coming Eurozone meeting on Greece.

Canadian Dollar At Risk For Further Losses On Slowing Inflation

- The Canadian dollar continued to hover near parity this week against its American counterpart. Data may sway the Loonie, including retail sales on Thursday and CPI on Friday when US markets will be quiet due to the Thanksgiving holiday. Weaker inflation is expected, but with the low volume, any potential damage could be limited.

The momentum that returned the US Dollar Index back above 10,000 was still remarkably less than what this week's equity drop would usually offer. In fact, most of the dollar's strength was provided by a 2.4% drop in the yen, while the Euro, Pound Sterling and Australian Dollar held their ground. With both big-ticket risk positive and negative events on the horizon next week, including the next bailout payment for Greece, developments in Israel and ongoing US fiscal cliff concerns, volatility is expected, but major risk pairs may again end the week with no ground gained.