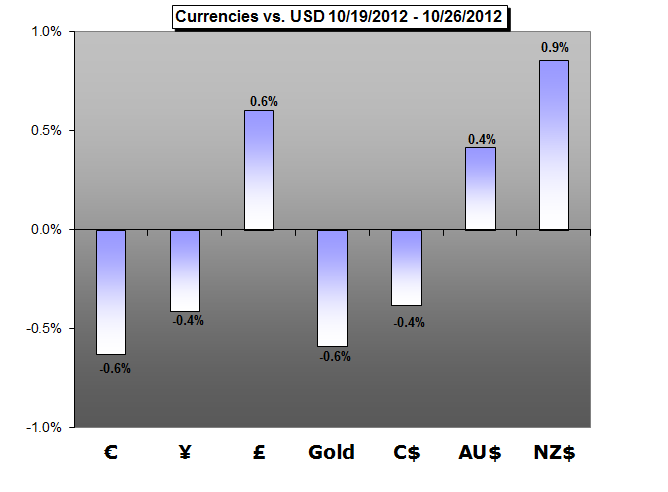 Dollar Positioned for Rally Back to 1.2800 if Stimulus Held

- The pressure is building and the masses are starting to take fundamental shortfalls across the world more seriously, while hope for continuous external support (stimulus) fades. The scales will soon tip, but what will set an underlying shift in sentiment into motion?

- But with most of the major data passing this past week – including Euro-zone PMIs and the Spanish third quarter labor market reading – the focus will return to the sovereign debt crisis and what steps will be done to make the next steps forward. Given the uncertainty surrounding this week’s events, we are taking a very cautious stance, with significant risks to both the bullish and bearish outcomes.

- While the Pound Sterling finally moved under its own forces this week, with an Olympic-powered GDP pushing it to retest recent highs, an important week of US event risk is likely to force sharp moves across key forex pairs in the days ahead, and we’ll keep an especially close eye on Friday’s US Nonfarm Payrolls report to gauge implications for the resurgent GBPUSD.

Japanese Yen to Resume Down Trend on BOJ Stimulus, US Data

- US economic data has increasingly topped economists’ expectations over recent weeks, feeding hopes that firming growth in the world’s top economy will help offset a slowdown in Asia and a recession in Europe. Consensus forecasts call for broad-based improvement across most of the week’s headline data releases, suggesting the path of least resistance favors a pickup in risk appetite that amplifies existing domestically-derived Yen selling pressure.

- As consumer prices expand at the fastest pace since the fourth-quarter of 2011, the larger-than-expected uptick in price growth may push the Reserve Bank of Australia to the sidelines, and the central bank may revert back a wait-and-see approach ahead of 2013 as the headline reading for inflation climbs back within the 2%-3% target range.

Gold Eyes Key Support Ahead of US NFPs- $1693 Remains Critical

- Gold prices continued to ease this week with the precious metal off by 0.60% to trade at $1711 at the close of trade in New York on Friday. The decline marks the third consecutive week of losses for bullion which encountered support at $1700 as positive US data continues to weigh on prospects for further Fed easing. Gold now looks poised for a test of critical support at $1693 with a break below this level risking substantial losses for the yellow metal.

- The Canadian dollar continued to weaken against its U.S. counterpart as the Bank of Canada softened its tone for a rate hike, but the loonie may regain its footing going into November as the economic docket is expected to instill an improved outlook for the world’s 10th largest economy.

- The Reserve Bank of New Zealand kept its key interest rate on hold at 2.50%, bucking some dark horse expectations for a rate cut mainly due to regional weakness in Australia and China. Despite the Kiwi’s outperformance this week, we remain neutral, though weighted to the upside.

Over the past three weeks, the Dow Jones FXCM Dollar Index (ticker = USDollar) has made absolutely no progress. However, there is little consistency to this elevated complacency. Yet, the pressure is building and the masses are starting to take fundamental shortfalls more seriously, while hope for continuous external support (stimulus) fades. The scales will soon tip, but what will set an underlying shift in sentiment into motion?