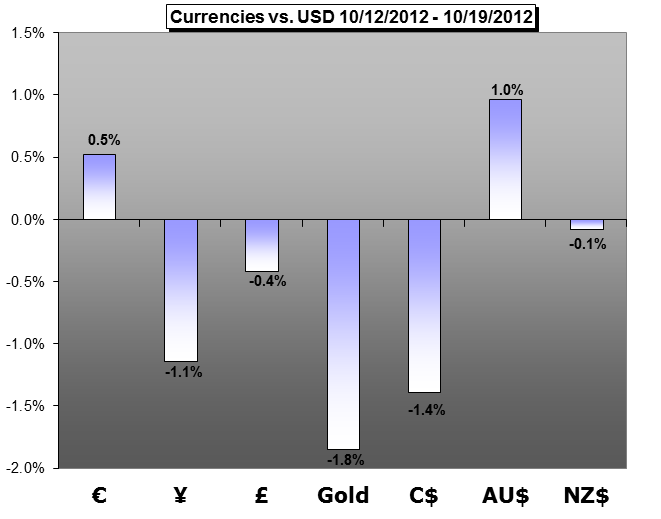 - The US Dollar remains stagnant around the 9,900 level. Although risk-off sentiment carved out a large win for the greenback this Friday, it still lost ground against its main currency counterpart, the Euro. With the second to last FOMC meeting of 2012 on Wednesday, how will the world's reserve currency perform this week?

- The Pound Sterling fell slightly this week agains the US dollar. Markets are anticipating Thursday's release of the UK's 3Q advance GDP. With the double dip recession expected to continue, traders are factoring higher expecations for additional BoE easing.

Euro Faces a Move To and Below 1.2800 if Risk Falters after EU Summit

- As the week ended without a Spanish request for a bailout, markets are bracing themselves once again for the possibility that a request may come only after a major risk shock. Although the single currency is strengthening as Spanish yields fall, any reversal in complacency could drive the Iberian nation's borrowing costs higher - and the Euro below 1.28000.

- The yen reversed its strength against the US dollar this week as US yields rose following better than expected economic data. Performance for the next week will hing on Wednesday's Fed decision and Friday's US GDP numbers.

- Although inflation is expected to rise in the third quarter, the Aussie remains dragged by outside forces. Markets will be monitoring key developments in the US and China for additional clarity for the currency going forward.

Gold Correction Gathers Pace- $1693 in Focus Ahead of FOMC

- As the yellow metal moves against the US dollar and hits its first range support, additional weakness may be warranted by the pace of decline. Gold is expected to be volatile in the later part of the week, especially during the FOMC meeting on Wednesday, durable goods and weekly jobless claims on Thursday, and US GDP on Friday.

- Following dovish commentary by Bank of Canada governor Mark Carney, traders have reversed their expectations of tightening in the near future. The weakest currency performer this week may attempt attempt parity this week against the US dollar as its central bank turns dovish.

- The Kiwi dollar finished in the middle of the pack again this week. With an RBNZ decision and trade data as the only economic events on the docket, the southern currency's performance may once again depend on its American counterpart.

The Federal Reserve's second to last monetary policy announcement of 2012 places the US Dollar at the center of attention next week. Coming on the heels of a reboot of quantitative easing just last month, it seems unlikely that Ben Bernanke and company are geared to deliver anything significant besides a restatement of the new status quo. FX volatility is expected across the major currency pairs next week as important economic data line the world docket.