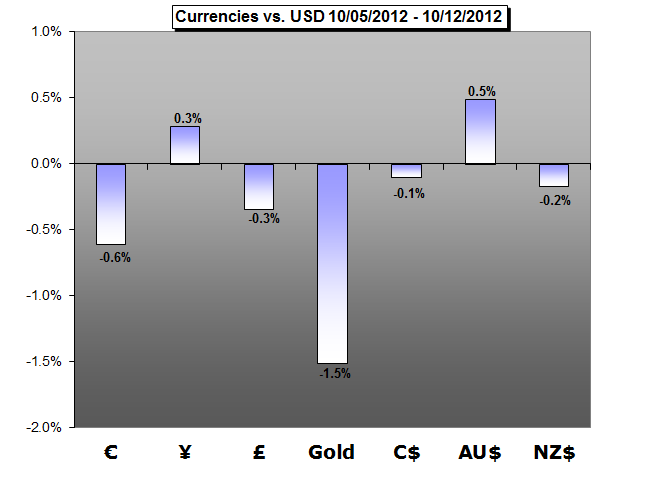 US Dollar in its Longest Rally Since June, Moment of Truth this Week

- The US dollar manged to carve out its strongest run in the last four months. With the earnings season underway, EU summits and Chinese data releases, any potential dissapointment may push the greenback towards 10,000.

- The British pound has rode on the coattails of the Euro and general risk sentiment. But, the coming week’s inflation data and Bank of England Meeting Minutes could provide momentum for the sterling's own move.

- The Euro had a rough week against major counterparts. All eyes remain on Spain and wonder if the Iberian nation will finally request aid.

- The yen had an unimpressive performance this week, staying relatively unchanged against the dollar. Yet, the Japanese currency's strength may persist before any new intervention calls.

- Markets continue to discount Australia's economic strength as the RBA continues dovish policies. However, markets will be watching Chinese inflation and GDP data on Monday and Thursday for further cues.

- While further weakness is likely in the near-term, losses are likely to remain limited as central banks around the world continue to strike a dovish outlook for monetary policy amid ongoing concerns regarding global growth prospects.

- While the Canadian dollar has weakened agains its American counterpart, markets continue to expect the Bank of Canada to raise rates. Governor Carney's speeches this week will reveal more about Canadian monetary policy going forward.

- With only CPI on the economic docket for the island nation, the Kiwi dollar's performance is expected to be greatly influenced by both Europe and China during the next week.

The US dollar has carved out its strongest run in four months this past week. With Friday’s close, the Dow Jones FXCM Dollar Index (ticker = USDollar) managed its fourth consecutive weekly advance, the longest bullish run since the opening week of June – when the currency peaked at two-year highs just above 10,300. With third quarter earnings, Chinese data and European summits on tap this week, will the dollar continue its run towards 10,000?