The New Zealand Dollar has rebounded rather robustly against the US Dollar in recent days, as softer-than-expected core CPI data out of the US cooled underlying inflation expectations and directed capital back into the longer-term Treasury bonds. This ultimately weighed on the haven-associated Greenback and opened the door for the higher-beta NZD to regain lost ground.

However, the risk-sensitive currency’s near-term trajectory may ultimately be defined by the upcoming Federal Open Market Committee’s (FOMC) monetary policy meeting on March 17, as investors focus on how, and if, the central bank will address the recent rise in longer-term Treasury yields.

Given the comments from several Federal Reserve members over the last few weeks, it seems relatively unlikely that the central bank will intervene to cap rates in the near term. When asked about the rise in longer-term rates, Chairman Jerome Powell stated that it “was something that was notable and caught my attention” but failed to hint at any impending action from the central bank. Instead, Powell reiterated that the Fed is still a “long way from our goals” and will be patient in assessing when the right time will be to eventually begin tapering monetary policy measure.

With that in mind, the trajectory of the New Zealand Dollar may ultimately be dictated by the actions of the Federal Reserve at its upcoming meeting. A lack of concern regarding the recent rise in yields probably opens the door for bond prices to continue falling, and may ultimately result in the US Dollar gaining ground against NZD.

On the other hand, any mention of yield curve control or increasing the rate of the central bank’s monthly bond purchases could fuel inflows into Treasury markets and undermine the Greenback against its higher-beta counterparts. 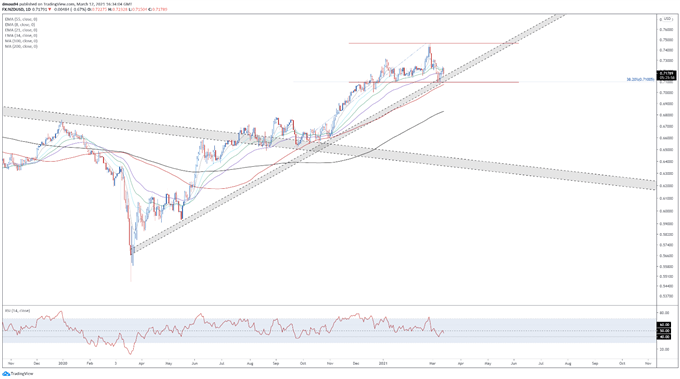 From a technical perspective, the outlook for NZD/USD rates remains skewed to the topside, as price continues to track the uptrend extending from the March 2020 low.

With the exchange rate remaining constructively perched above the trend-defining 55-EMA (0.7176) and the psychologically imposing 0.7100 handle, the path of least resistance seems higher.

A daily close back above the 21-EMA (0.7219) would probably intensify near-term buying pressure and cave a path for price to challenge the yearly high (0.7464).

On the other hand, penetrating key support at the 38.2% Fibonacci could trigger a more extended correction lower and bring the sentiment-defining 200-MA (0.6831) into focus. 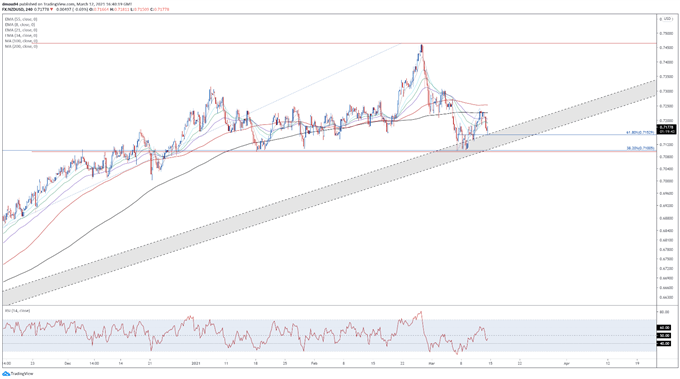 Zooming into the 4-hour chart bolsters the bullish outlook depicted on the daily timeframe, as price surges away from confluent support at the 61.8% Fibonacci (0.7152) and the uptrend extending from the March 2020 nadir.

The development of the RSI also hints at swelling bullish momentum, as the oscillator eyes a push back above its neutral midpoint.

A convincing break back above the March 11 high (0.7241) would probably pave the way for buyers to drive the exchange rate back towards the yearly high (0.7464).

However, breaching 0.7150 could trigger a more extended pullback and bring psychological support at 0.7100 into the crosshairs. 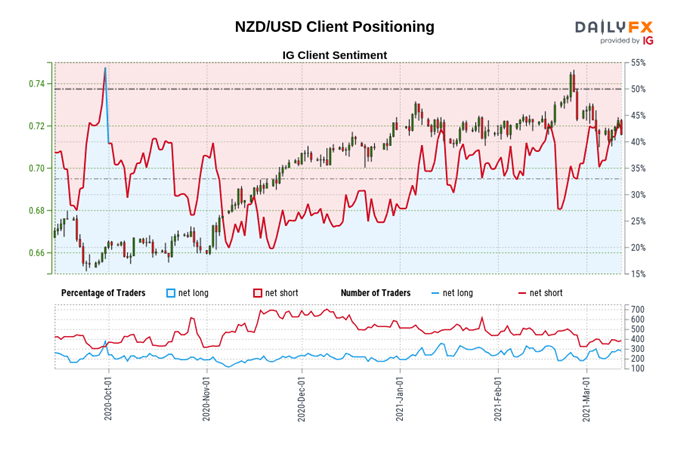