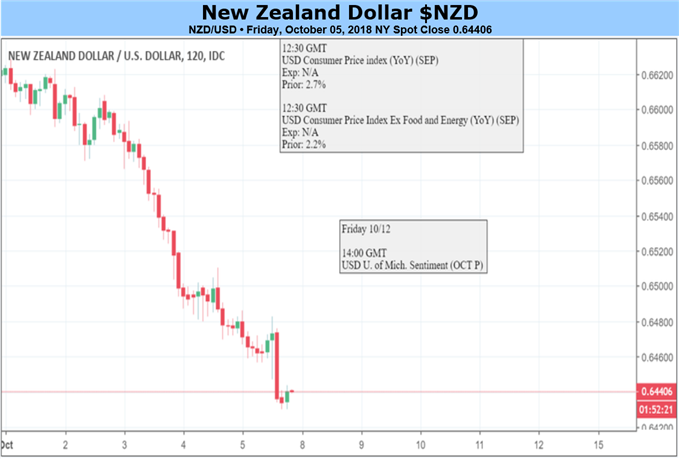 The sentiment-linked New Zealand Dollar succumbed to intense selling pressure during the first week of October as risk trends dominated headlines. The currency did not have much to listen to in regards to key local economic data which was rather sparse. Instead, US government bond yields soaring to multiyear highs helped suppress the relative appeal of stocks which boded ill for NZD as traders bought into the US Dollar.

Next week may offer a similar scenario with New Zealand Business Manufacturing PMI the notable domestic economic event risk. Given that the RBNZ is open to both a rate cut and hike as its next move, this places additional weight on how data performs. We have seen dovish monetary policy bets wane in recent weeks but those may be reignited should the survey disappoint given the negativity in business confidence.

NZD/USD is arguably more vulnerable to external developments ahead with a notable event risk being the first round of Brazil’s presidential election which takes place over the weekend. There, Jair Bolsonaro of the PSL and Fernando Haddad of the PT may tie during the first round. In the end, a victory for the former may offer a more favorable response from local stock markets but with lasting consequences.

This may offer a temporary lift to the MSCI Emerging Markets ETF which fell dramatically in the past week. Looking at the chart below, we can also see the close relationship between the index and the New Zealand Dollar. Thus a Bolsonaro win could potentially send the New Zealand Dollar higher should we see some confidence from developing nations as a result. 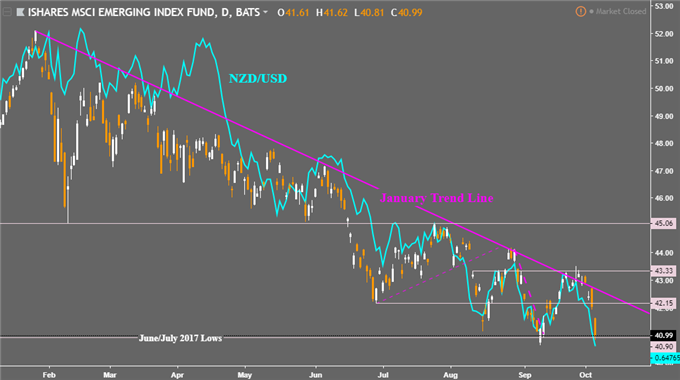 If we do see some gains in NZD on that, those may prove to be short lived however. The rest of the week also contains the IMF presenting its World Economic Outlook. Director Christine Lagarde has already expressed her concerns about trade wars and their consequences to global growth. More of the same reiteration there may upset the markets which would thus threaten to add losses back to the New Zealand Dollar.

Speaking of trade wars, curiously it was discovered last week that major US companies such as Amazon were a victim of a Chinese chip attack. Relationships between President Donald Trump and Xi Jinping are already tense given the additional $200b in tariffs the former imposed on the latter. If these revelations inspire additional retaliation from Trump, there could yet be more room for market mood to deteriorate.

The markets are also getting acclimated to the reality that tightening global credit conditions are here to stay as the Fed continues pursuing interest rate hikes. As the yield advantage between it and the RBNZ continues to widen, relatively speaking the New Zealand Dollar still has much to lose. Given these risks, the fundamental outlook will have to be bearish.