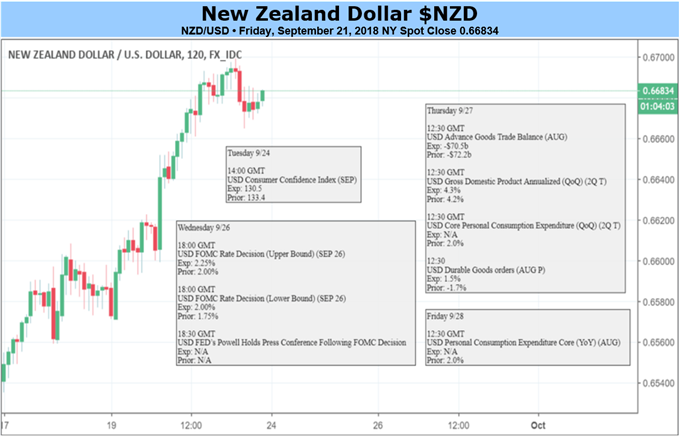 Have a question about what’s in store for New Zealand Dollar next week? Join a Trading Q&A Webinar to ask it live!

Previously, the New Zealand Dollar was on pace to deliver its best performance against the US Dollar in a week this year so far. NZD/USD gained as much as 2.3 percent which was the most since January 2017. It could thank a better-than-expected New Zealand GDP report and market pre-positioning for the risk of a relatively dovish Fed.

The week ahead boasts a couple of notable event risk starting with the Reserve Bank of New Zealand interest rate announcement. Lately, the markets have been slowly pricing in an RBNZ rate cut with those odds at one point hovering around 30% for February 2019. However, last week’s upbeat local GDP data has diminished some of those dovish expectations. Overnight index swaps are now pricing in a 13.6% chance of a cut by then.

Despite the rosy GDP data, annualized rates of growth have slowed from the strong performance seen in 2016. Meanwhile the country has been experiencing mild disinflation since 2017. Adding on top of this is the central bank’s concern over weak business confidence which recently sank to its lowest since 2008. The door has been left open for a rate cut by RBNZ Governor Adrian Orr and it may very well stay that way.

Meanwhile the Fed has its own monetary policy announcement in the hours before the RBNZ. The markets are widely anticipating a rate hike and that may very well be. But they are also strongly pricing in another one for December. Those odds stand around 75%. Given that real wage growth was seen in the US, Fed Chair Jerome Powell may prepare the markets for the next move. This would help lift the US Dollar once more.

With that in mind, while the New Zealand Dollar has edged out a remarkable rally, there is the risk that it could come to a halt or reverse course. A dovish RBNZ may also help to somewhat derail the NZD’s ‘pro-risk’ ties to stock markets. So far, equities have largely brushed off news that the US will proceed with $200b in Chinese import tariffs which will begin on Monday. This could leave it failing to capitalize as much as it used to if the S&P 500 proceeds for another solid week. The outlook will be bearish.