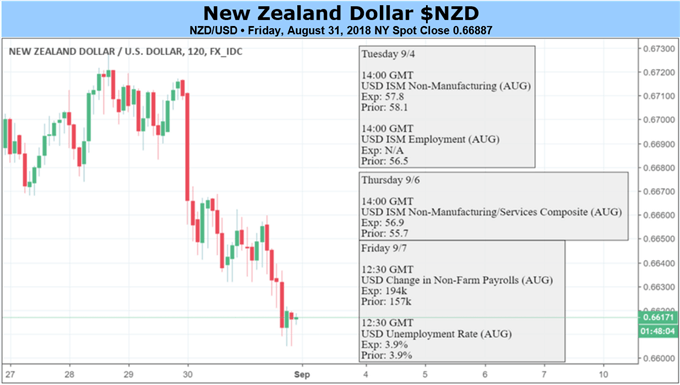 Unlike the Reserve Bank of Australia(which leans towards a hike in the long run), the RBNZ offers a balanced view of where interest rates could go. This places the focus for where NZD prices may go on local economic data. As far as next week is concerned, prominent domestic event risk is notably lacking. There may be some weakness on terms of trade data if it disappoints.

Rather than statistics, the pro-risk New Zealand Dollar will arguably focus on how markets will be impacted by sentiment. Last week, rising trade war fears and emerging market concerns also weighed on Kiwi Dollar prices. The former was inspired by Donald Trump’s displeasure with North Korean denuclearization progress, accusing China of holding it back.

As for the latter, the Trump Administration threatened to impose an additional $200b in Chinese import tariffs as early as next week. If he follows through, China seems likely to retaliate. This would increase trade war concerns, likely denting stocks and the pro-risk New Zealand Dollar. If the US Dollar gains on haven bids, this could also pressure the HKMA to defend their currency peg again and equities could weaken.

The New Zealand Dollar may also be vulnerable to the Bank of Canada policy announcement. The central bank is one rate hike away from tying the RBNZ’s OCR. Unlike the RBNZ, markets are pricing in a better-than-even chance (~70%) of a BoC hike in October. Canada is expected to hold rates unchanged in September, but it may signal its intension to act soon. This would bring the Canadian Dollar closer to overtaking NZD in terms of yield, leaving the latter at risk.

Finally, the markets are still underpricing the probability of an additional Fed rate hike by the end of this year. Expectations that slowly align with the central bank’s outlook would bode well for US Dollar prices. This could occur on next week’s US jobs report. A combination of vulnerabilities that leave the New Zealand Dollar at risk from sentiment and monetary policy fundamentals prolongs the bearish outlook.