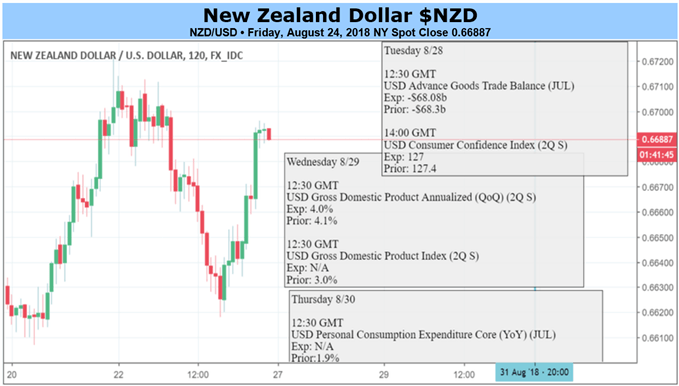 Have a question about what’s in store for New Zealand Dollar next week? Join a DailyFX Trading Q&A Webinarto ask it live!

The New Zealand Dollar rallied during the first part of last week, boosted by stronger local retail sales data. However, this faded soon after as the US Dollar appreciated against its major counterparts on hawkish Fed monetary policy expectations leading into the Jackson Hole Central Banking Symposium. Not to mention it was also bogged down by a turn lower in global stocks as emerging markets sagged sentiment.

Similar to last week, the one ahead offers little in the way of domestic economic statistics that could alter near-term RBNZ rate expectations. Even if there was, they may not offer a lasting response to NZD as we saw with the retail sales. This is because the central bank was decidedly dovish at its interest rate announcement earlier this month. Meanwhile, Governor Adrian Orr reiterated last week that they are in no rush to adjust policy.

Thus, the spotlight for what could impact NZD/USD and other Kiwi crosses may come from external factors. On this front, there are a couple of key US economic event risks. We will get the second estimate of Q2 GDP and the Fed’s preferred measure of inflation. Interestingly, the US Dollar has been rising despite economic news flow out of the country tending to underperform as of late.

This could perhaps be due to the Fed’s commitment to raising rates, it still anticipates two more increases by the end of this year. With that in mind, it would probably take a dramatic miss in key economic statistics to materially alter their outlook. This opens the door for the greenback to potentially resuming its dominant uptrend since April as the markets slowly but surely price in that additional hike.

The sentiment-linked New Zealand Dollar could also be left vulnerable in the week ahead as EU foreign affairs ministers discuss trans-Atlantic relations and the Iran Nuclear Deal on Thursday. Signs that the nation bloc could step up efforts to retaliate against Trump’s sanctions on Iran could fuel trade war fears. This may bode ill for stocks and thus the NZD.