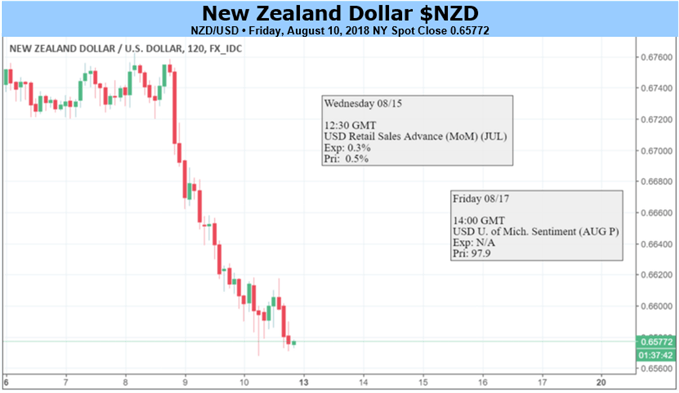 After consolidating since late-June, the sentiment-linked New Zealand Dollar made its decision and headed lower against the US Dollar. Arguably, it was a dovish RBNZ that sent NZD/USD tumbling the most in a day in six months (-1.3%). But, it did not end there. Worries about European bank exposure to Turkey amidst the Lira’s performance soured market mood. NZD/USD fell about 2.37% last week, the most since October 2017.

A major break lower in NZD/USD begs the question if it could be sustainable. Continuation might mean eventually testing the January 2016 and August 2015 lows. This could be the case, but perhaps not because of domestic event risk. New Zealand’s economic calendar docket is lacking critical events. Even if it did, the central bank’s downgrade in future rate hike expectations undermines its relevance if data outperforms.

Apart from retail sales, the US economic docket is also relatively sparse on key data. Although it may be worth tuning in for the New York Fed’s Q2 household debt and credit report on Monday. We shall see how tightening local credit conditions are impacting borrowing. If lending is still strong and upbeat, it could yet bolster the case for the Fed to raise rates to slow inflation. This could boost USD at the expense of NZD.

With that in mind, the focus for the New Zealand Dollar in the week ahead will likely come from risk trends and how global stock indexes behave. Rising worries around Turkey, and to a certain extent ever-present ones around Italy, could undermine both equities and ECB 2019 rate hike bets. The former could weigh on the Kiwi Dollar while the latter can lift the greenback further at the expense of NZD.

Meanwhile across the English Channel, the risk of the UK inching closer to a “no deal” Brexit outcome also overshadows global stocks. Last week, Trade Secretary Liam Fox said that the chance of one is at 60-40 odds. Prime Minister Theresa May is also preparing the country in the event that one occurs. A meeting to discuss that with her cabinet members is reportedly scheduled to occur in early September.

Next week will also see Brexit talks resume in Brussels on Thursday and Friday. Given that Mrs. May seems to be stepping up preparations in the event that the UK abruptly breaks off with the EU, delays in the progress of negotiations could increase uncertainty as the March 2019 withdrawal deadline approaches. If the markets are unnerved by developments from Brussels, the sentiment-linked New Zealand Dollar could be at risk. This is amplified if the US Dollar takes a role as a safe haven ahead too, adding to NZD/USD downside pressure.

On a side note, AUD/NZD could net out market mood swings as it sometimes behaves as a “risk neutral” currency pair. This allows it to focus more so on developments relating to RBA and RBNZ monetary policy expectations. A better-than-expected Australian jobs report next week could push AUD/NZD higher. Data out of the country has been increasingly outperforming relative to expectations lately. This opens the door for an upside surprise, perhaps boosting RBA rate hike bets amidst a dovish RBNZ.