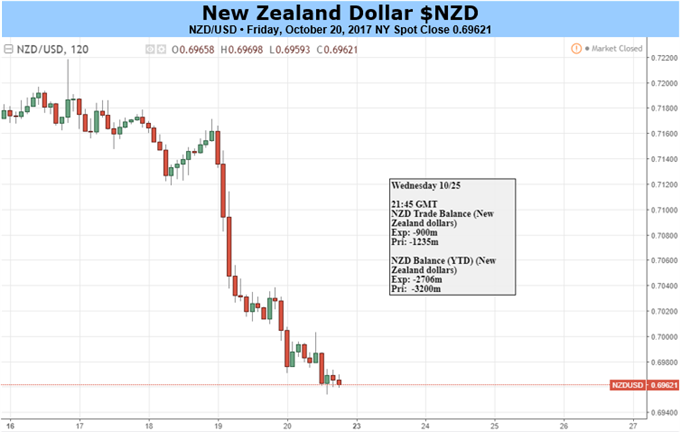 NZD/USD may continue to give back the advance from the 2017-low (0.6818) as the new coalition government under Prime Minister Jacinda Ardern pledges to review and revise the Reserve Bank of New Zealand’s (RBNZ) primary mandate for price stability, but the key developments coming out of the U.S. economy may temper the recent sell-off in the kiwi-dollar exchange rate should the figures undermine the Fed’s scope to implement higher borrowing-costs.

The New Zealand dollar stands at risk of facing additional headwinds as the new leadership wants the RBNZ to also be accountable for full-employment, and the central bank is likely to come under increased scrutiny as lawmakers mull a fresh committee to manage the official cash rate. A material change in the decision-making process is likely to sap the appeal of the New Zealand dollar as it fosters a more intricate environment to normalize monetary policy. With that said, acting Governor Grant Spencer may merely try to buy more time at the next policy meeting on November 9 as ‘monetary policy will remain accommodative for a considerable period.’

Nevertheless, the advanced 3Q U.S. Gross Domestic Product (GDP) report may prop up kiwi-dollar next week as the growth rate is anticipated to increase an annualized 2.6% compared to the 3.1% expansion during the three-months through June. Even though the Federal Open Market Committee (FOMC) is widely expected to deliver another rate-hike in December, a marked slowdown in economic activity may drag on the dollar as Fed officials start to lower the longer-fun forecast for the benchmark interest rate. In turn, market participants are likely to pay increased attention to the monetary policy outlook for 2018 especially as Chair Janet Yellen’s tenure is set to expire in February, and the upcoming rotation within the FOMC may pose a threat to USD bulls as the central bank appears to be on course to complete its hiking-cycle ahead of schedule. 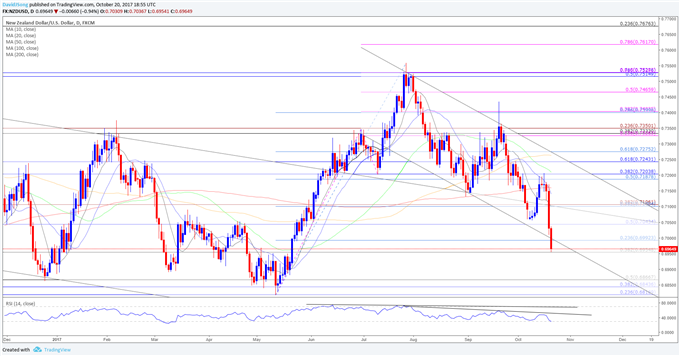 Downside targets remain on the radar for NZD/USD as it clears the monthly opening range and starts to carve a series of lower highs & lows. A break/close below the former-resistance zone around 0.6950 (38.2% retracement) raises the risk of seeing a move back towards the 2017-low (0.6818), which largely lines up with the Fibonacci overlap around 0.6820 (23.6% retracement) to 0.6870 (50% retracement).

However, failure to break/close below the 0.6950 (38.2% retracement) region raises the risk for a near-term rebound as the pair sits at channel support, while the Relative Strength Index (RSI) struggles to push into oversold territory. Lack of momentum to break below 30 may spark a similar reaction to earlier this month, with the first topside hurdle coming in around 0.7040 (50% retracement) followed by the 0.7100 (38.2% retracement) handle. 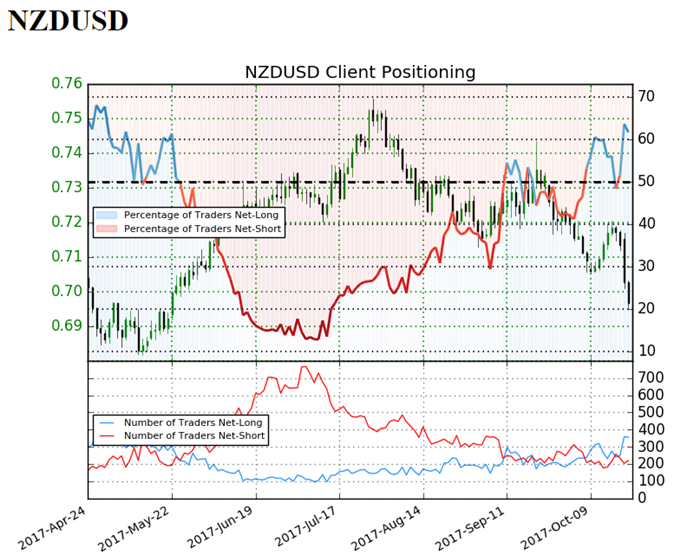