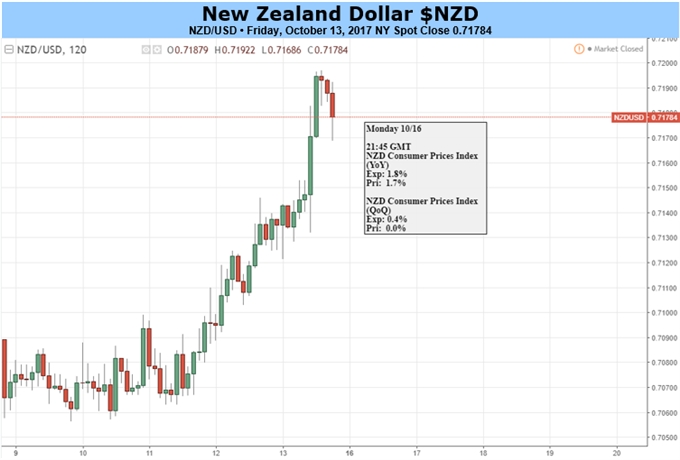 New Zealand’s 3Q Consumer Price Index (CPI) may undermine the near-term rebound in NZD/USD should the data print encourage the Reserve Bank of New Zealand (RBNZ) to carry the record-low cash rate into 2018.

With market participants forecasting an annualized print of 1.8%, a marginal uptick in the headline reading for inflation may ultimately dampen the appeal of the New Zealand dollar as it continues to hold below the RBNZ’s 2% target midpoint. In turn, acting Governor Grant Spencer may largely endorse a wait-and-see approach at the last 2017-meeting on November 9 as ‘headline inflation is likely to decline in coming quarters, reflecting volatility in tradables inflation.’ At the same time, the RBNZ may continue to jawbone the local currency as ‘a lower New Zealand dollar would help to increase tradables inflation and deliver more balanced growth,’ and NZD/USD may face a greater threat of giving back the advance from earlier this year if the key developments coming out of the New Zealand economy drag on interest-rate expectations.

Nevertheless, a material pickup in the CPI may fuel the near-term rebound in the New Zealand dollar as it puts pressure on the central bank to normalize monetary policy ahead of schedule. 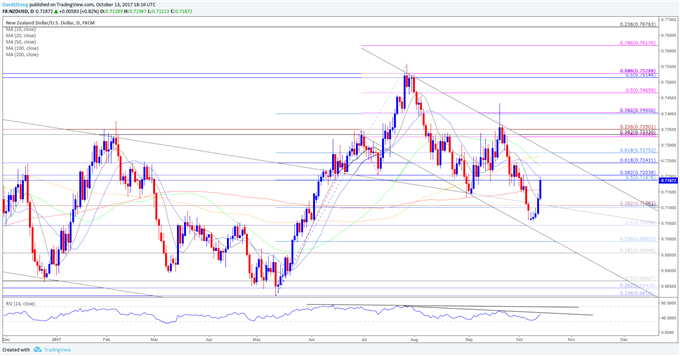 Topside targets are back on the radar for NZD/USD as the former-resistance zone around 0.7040 (50% retracement) offers support, with the pair at risk of extending the recent series of higher highs & lows as the Relative Strength Index (RSI) snaps back ahead of oversold territory.

However, failure to close above the Fibonacci overlap around 0.7190 (50% retracement) to 0.7200 (38.2% retracement) may give way to range-bound conditions especially as both price and the RSI preserves the downward trends carried over from June. With that said, a lackluster CPI print may keep the bearish formations in play, with the pair facing a greater risk of giving back rebound from the 2017-low (0.6818) as the RBNZ remains in no rush to normalize monetary policy. 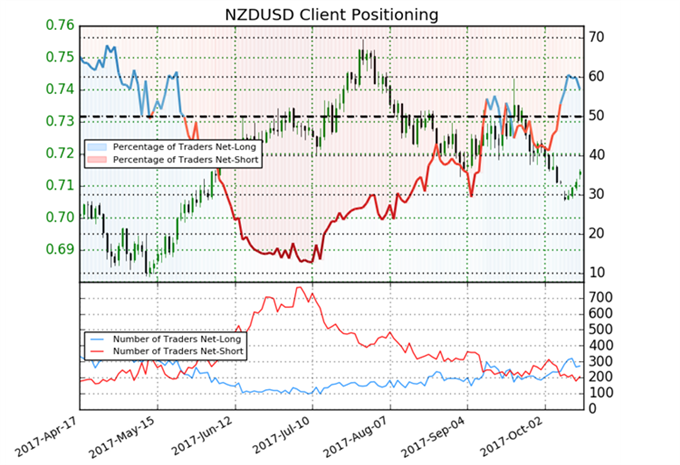