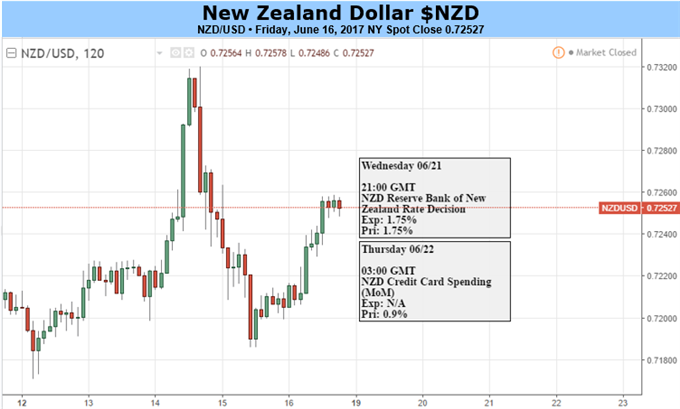 The New Zealand Dollar is in a rut and is unlikely to break out either upwards or downwards as the central bank’s official cash rate looks set to remain at 1.75% for months and perhaps years to come. The Reserve Bank of New Zealand meets on Thursday morning local time and a rate move would be a huge surprise.

Instead, RBNZ Governor Graeme Wheeler will likely emphasise not just that rates will not be changed for a long time yet but also that the bank’s bias is strictly neutral, with an equal chance of the next move being an increase or a decrease. That could be as far away as late next year.

As the chart above shows, NZDUSD has been climbing since mid-May. However, that rally has run out of steam and for the past few sessions the pair has traded sideways. That’s despite news last week of lower-than-expected GDP growth of 0.5% quarter/quarter in Q1.

The data imply that GDP growth this year could be nearer 3.0% than 3.5%. However, core inflation in New Zealand remains subdued and headline inflation is only just above the midpoint of the RBNZ’s 1%-3% target range.

This all suggests a neutral bias for NZD, although IG Client Sentiment data suggest that NZDUSD could resume its uptrend once the current consolidation period ends. 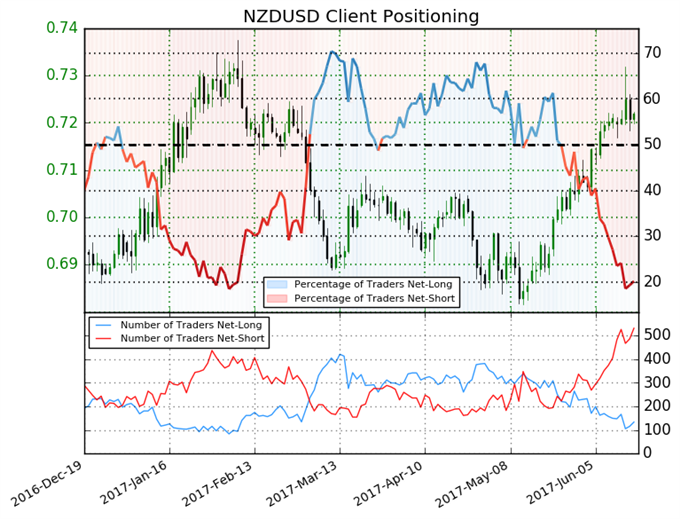 We typically take a contrarian view to crowd sentiment, and the fact traders are net-short suggests NZDUSD prices may continue to rise. Traders were further net-short than Thursday and last week, and the combination of current sentiment and recent changes gives us a stronger NZDUSD-bullish contrarian trading bias.

What will drive the currency majors in 2017’s second half? Check out the freeDailyFX Quarterly Forecasts