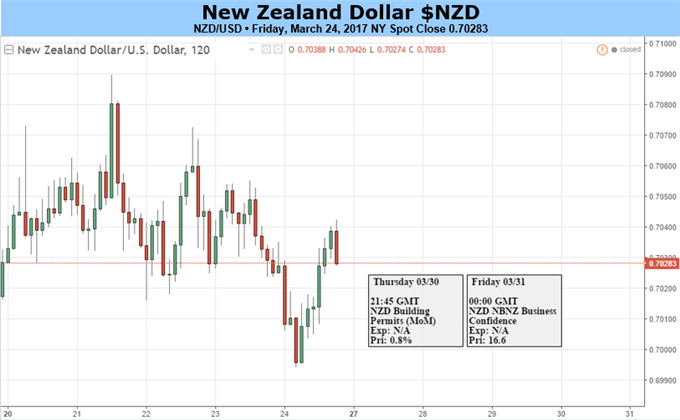 The New Zealand dollar looks set to resume its downward path, and the Reserve Bank of New Zealand will not stand in its way. The NZD/USD is relatively unchanged on the week but a hawkish press statement from the central bank on March 23, after it left rates unchanged, points to the pair moving south and testing the recent lows.

“The trade-weighted exchange rate has fallen 4 percent since February, partly in response to weaker dairy prices and reduced interest rate differentials. This is an encouraging move, but further depreciation is needed to achieve more balanced growth.”

Wheeler added that monetary policy will remain “accommodative for a considerable period.”and while numerous uncertainties remain, “policy may need to adjust according.”

A recent report from rating’s agency Moody’s Investor Services gave the Government of New Zealand the thumbs-up and re-affirmed the country’s Aaa rating. Moody’s said that it expects New Zealand to be among the fastest growing Aaa-rated economies in the coming years. They agency added that while the economy is small and open, in the event of shocks the economy “responds swiftly and positively to a weaker exchange rate and lower interest rates, as seen in recent years. Exchange-rate and interest-rate sensitive sectors such as tourism and construction generate economic activity and jobs to support income.”

After the recent post-FOMC relief rally, the Kiwi dollar continues to weaken. Support may kick-in at March’s low print of 0.68903 before December 2016’s low of 0.68621 comes into focus. 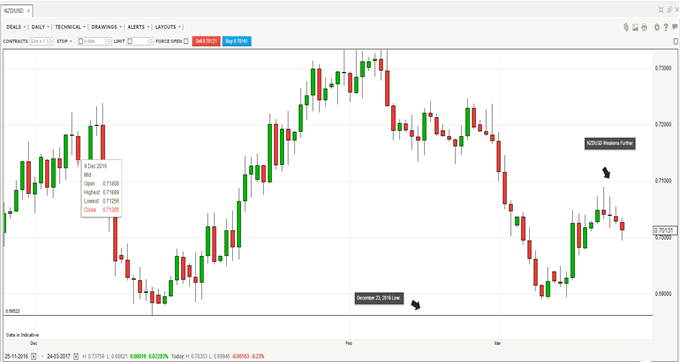