Kiwi Gains After Dovish Fed, But Shift in Stance from RBNZ Doubtful 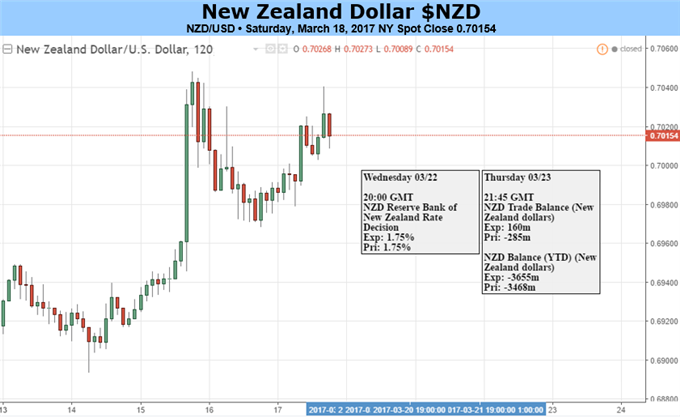 - NZD/USD gains were driven primarily by the FOMC, not positive data from New Zealand.

- GDP print means RBNZ is unlikely to alter its accommodative stance on rates at its meeting on March 23.

The New Zealand Dollar gained on the US Dollar this week as markets evinced disappointment that the US Federal Reserve wasn’t more hawkish on interest rates after raising them on Wednesday. However, the Kiwi has given back some of those gains since, with softer economic data hammering home the dovish message from the Reserve Bank of New Zealand, which held the official cash rate steady at record lows of 1.75% at its February policy meeting, and suggested that it could remain there for two years or more. The RBNZ Governor added that the currency ought to be lower than current market pricing.

Earlier this week, the Kiwi fell against its major counterparts after fourth quarter GDP data missed expectations. New Zealand’s economy grew 2.7% y/y versus 3.2% expected and 3.3% in the third quarter (revised lower from 3.5%). The nation’s output increased by 0.4% q/q versus 0.7% expected and 0.8% prior (also revised lower from 1.1%). This marked the slowest pace of quarterly expansion since July 2015. Front end New Zealand government bond yields fell simultaneously with the data’s release.

Data were mixed on Friday, with the March consumer confidence index from lender ANZ and research firm Roy Morgan slipping 1.7% on the month to 125.2. This came after news that New Zealand’s manufacturing sector expanded strongly in February. The Performance of Manufacturing Index came in at 55.2 for the month, well above January’s revised 52.2. This series is analogous to the Purchasing Managers Indexes (PMIs) released globally. Any reading above the 50 line signifies sectoral expansion. The index is now at its highest level since last September and January’s PMI dip now looks largely seasonal in nature.

Next week’s docket is sparse, apart from the RBNZ rate decision on Wednesday. The New Zealand Consumer Sentiment Index will be released Sunday, followed by Dairy Auction Prices on Tuesday, and Trade Balance figures on Thursday. None of these data should hold too much influence with the RBNZ decision on tap.

At the March 23 policy meeting, the RBNZ is once again expected to maintain the official cash rate at 1.75%, and continue to push a neutral if not dovish bias. At the previous RBNZ decision, Governor Wheeler made clear the intention to keep rates at their present level for the entirety of 2017, dispensing any rate hike expectations markets had priced in for this year. Likewise, given his complaints that the Kiwi was overvalued and that global risks remain – a clear reference to the rise of protectionism, led by the United States and the United Kingdom – there seems little reason to believe that, with recent GDP data having disappointed, the RBNZ will upgrade its tone. –OM