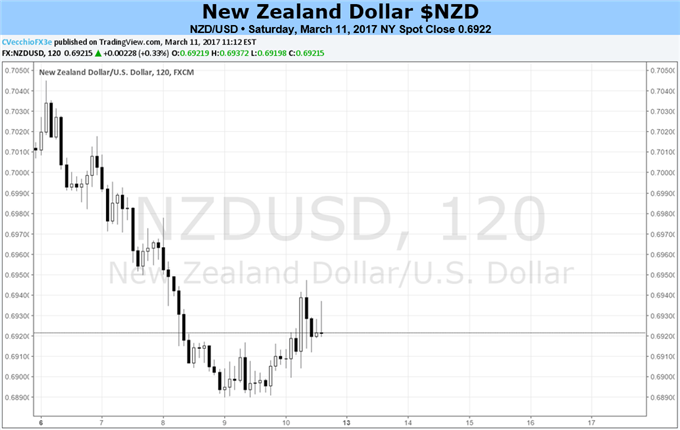 - Rising US rate hike expectations are dampening demand for the high yielding Kiwi.

- RBNZ’s shift in stance and lack of supportive data are weighing on New Zealand Dollar.

- Next week’s GDP print is unlikely to alter the RBNZ’s accommodative stance on rates.

The New Zealand Dollar continues to weaken after a shift in sentiment from the Reserve Bank of New Zealand at its February policy meeting. While it had held the official cash rate steady at record lows of 1.75%, it suggested that it could remain there for two years or more; rates markets (per overnight index swaps) had been pricing in a 76% chance of a rate hike by year end.The Kiwi started its slide as RBNZ Governor Graeme Wheeler said that the currency ought to be lower than current market pricing which did the damage, pouring water on rate hike bets.

Domestically, he said the greatest source of uncertainty currently lies around the housing market and the possibility that imbalances in the housing market might deteriorate. House price inflation has moderated substantially in recent months, but it’s too early to say whether this moderation will continue, according to Governor Wheeler.

With the RBNZ and its governor pushing back against the currency’s ‘overvaluation,’ this past week’s data releases didn’t help the Kiwi either.A-1.8% drop in manufacturing sales in Q4’16 and sliding dairy prices at this week’s Global Dairy Trade auction added fuel to the fire; the GDT Price Index fell by another -6.3% from two weeks earlier. The strong US Dollar, which is being fueled by expectations of faster rate hikes from the US Federal Reserve, is putting pressure on high yielding currencies and emerging markets alike. The recent weakness in commodities, particular soft/agriculture, has also been weighing on the Kiwi.

Next week’s New Zealand economic calendar is looking a little busier, with consumer confidence stats due outTuesday, followed by current account data on Wednesday, and most vitally, New Zealand’s Q4’16 Gross Domestic Product report Thursday. However, markets don’t expect the GDP print to alter the RBNZ’s accommodative stance on rates as growth is expected to slow to +0.7% q/q from +1.1% q/q, or +3.2% y/y from +3.5% y/y. For now, there are few good things to say about the New Zealand Dollar, the worst performing major currency in each of the past two weeks.