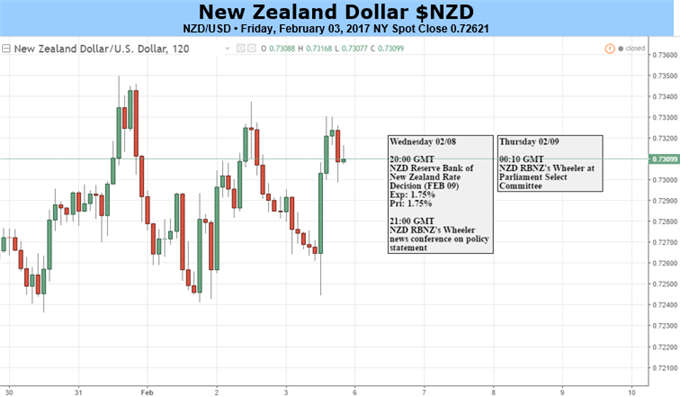 The Reserve Bank of New Zealand’s (RBNZ) first interest rate decision for 2017 may keep NZD/USD afloat as the central bank is widely expected to keep the official cash rate at the record-low of 1.75%, but the higher-yielding currency stands at risk of giving back the advance from earlier this year should Governor Graeme Wheeler and Co. highlight a dovish outlook for monetary policy.

After delivering a 25bp rate at its last interest rate decision for 2016, the RBNZ is likely to endorse a wait-and-see approach for the foreseeable future as ‘current projections and assumptions indicate that policy settings, including today’s easing, will see growth strong enough to have inflation settle near the middle of the target range.’ As a result, the 1.3% expansion in New Zealand’s 4Q Consumer Price Index (CPI) may encourage central bank officials to adopt an improved outlook for the region, with the New Zealand dollar at risk of extending the rally from the previous month should the central bank show a greater willing to gradually move away from its easing-cycle.

However, the central bank may keep the door open to further embark on its easing-cycle as the upward pressure in the New Zealand dollar exchange rate ‘continues to generate negative inflation in the tradables sector.’ In turn, Governor Wheeler may prepare New Zealand households and businesses for another rate-cut as ‘significant surplus capacity exists across the global economy,’ and the 0.8% expansion in New Zealand Employment may do little to alter the RBNZ’s cautious outlook as wage growth remains depressed. In turn, a slew of dovish rhetoric from Governor Wheeler and Co. may spur near-term headwinds for the New Zealand dollar as the central bank appears to be in no rush to remove its accommodative policy stance. 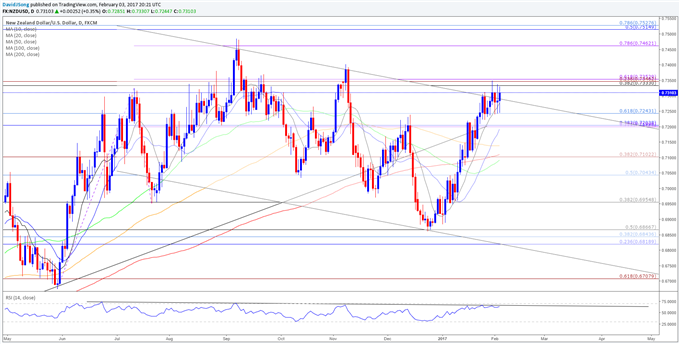 With that said, NZD/USD may consolidate ahead of the RBNZ’s policy meeting as it remains stuck within the narrow range carried over from the end of January, but the pair may continue to threaten the descending channel carried over from the previous year and make a more meaningful run at the November high (0.7403) should the policy statement boost interest rate expectations. In contrast, dovish rhetoric from the RBNZ may keep the pair capped by the Fibonacci overlap around 0.7330 (38.2% retracement) to 0.7350 (61.8% expansion), and the Relative Strength Index (RSI) may continue to respond to the bearish formation from June amid the deviating paths for monetary policy. - DS