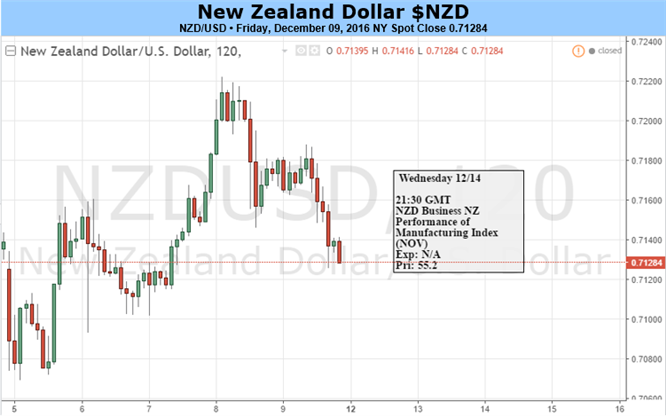 Earlier in the week, the world was caught by a bit of a surprise with the announcement of the resignation of New Zealand Prime Minister, John Key. Mr. Key was unique in his role as a political leader, as he has considerable financial market experience after his tenure as an FX Dealer at Merrill Lynch. ‘Teflon John’ had become known for his ability to help steer New Zealand through the financial crisis relatively unscathed during his 3-term tenure; and very few were expecting Mr. Key’s resignation.

But during his weekly press conference, Mr. Key announced that he would not be seeking a fourth-term and would be stepping down from the post of Prime Minister; calling it ‘the hardest decision I’ve ever made.’ Stepping in for Mr. Key to take over the National Party until a caucus is held to choose a new leader will be Mr. Key’s prior intra-party rival, Bill English. And while Mr. English is quite a bit different from Mr. Key, with Mr. English being noted for his stability while Mr. Key is known for following his ‘gut instinct,’ it’s difficult to discern a vast amount of divergence in economic policies from this point; so it would appear that this has had a net-neutral bearing on the New Zealand Dollar throughout the most recent week.

However, more pertinent to near-term Kiwi-Dollar spot rates is the speech on Thursday from the head of the Reserve Bank of New Zealand, Mr. Graeme Wheeler. In this speech Mr. Wheeler signaled that the bank felt current policies could achieve the 2% inflation goal; deductively diminishing the prospect of additional near-term rate cuts. Also in that speech, Mr. Wheeler hinted towards optimism while sharing his expectation for monetary policy to remain as accommodative in the near-term. He also went on to say that while there remains considerable global uncertainties, the bank is expecting continued strong growth over the next 18 months as driven by construction, migration and tourism. And while growth is coming-in stronger, inflation remains subdued and below trends over the past two decades, which brings us to the quandary that the RBNZ is likely going to have to continue to contend with for the foreseeable future.

Inflation in New Zealand is asymmetric; with extremely strong real estate prices and inflationary pressures that are significantly-elevated beyond historical norms. This makes the prospect of deeper interest rate cuts appear even more risky given the fact that this additional motivation to homebuyers may driver prices even-higher without necessarily driving-up core inflation to the same degree. This is likely one very relevant reason that NZD/USD has been so well supported around the support zone from .6950-.7050: The RBNZ’s in-between a rock and a hard place and there really isn’t much room for them to operate. Hiking rates to temper real estate price growth runs the risk of choking-off growth to the rest of the economy while driving NZD-higher, which could expose exporters to even more pain down-the-road. Cutting rates maybegin to help core inflation, but real estate prices will likely see an even bigger jump, exposing the potential for a ‘bubble’ within the New Zealand economy.

Next week’s New Zealand economic data is extremely light, with but one medium-importance announcement on the docket with the NZ Performance of Manufacturing Index on Wednesday. Likely more pertinent to NZD on next week’s calendar, and also on Wednesday, is the Federal Reserve’s rate decision. A hike from the Fed is largely assumed here, but far more relevant is how aggressive the bank might be looking to hike rates in 2017; and this can have a strong bearing on near-term NZD/USD price action.

Due to this opaque backdrop – the forecast for the New Zealand Dollar will be held at neutral for the week ahead. Should USD-strength around the Fed’s meeting on Wednesday bring on a revisit to the well-tested support zone between .6945-.7050, bullish positions may become attractive again.