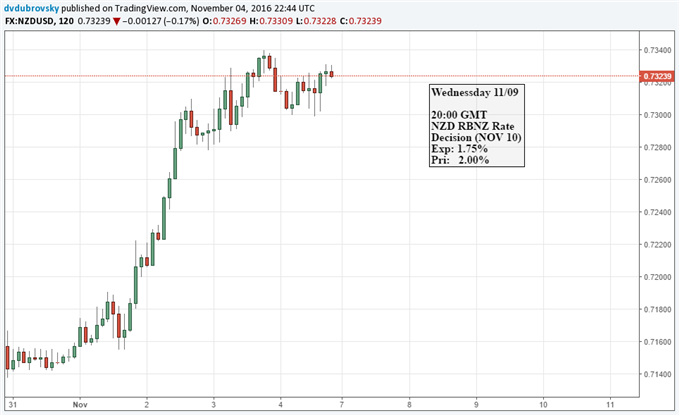 NZD: Is the RBNZ Approaching the End of its Easing-Cycle?

The Reserve Bank of New Zealand’s (RBNZ) last 2016 interest rate-decision on November 10 may heavily impact the near-term outlook for NZD/USD as Governor Graeme Wheeler and Co. are widely anticipated to cut the official cash rate to a fresh record-low of 1.75%.

According to a Bloomberg News survey, all 15 of the economists polled forecast the RBNZ to deliver a 25bp rate-cut as the central bank warns the ‘current projections and assumptions indicate that further policy easing will be required to ensure that future inflation settles near the middle of the target range,’ and the near-term rebound in NZD/USD may largely unravel over the days ahead should Governor Wheeler continue to endorse a dovish outlook for monetary policy. The 1.4% expansion in 3Q New Zealand Employment may not be enough to keep the RBNZ on the sidelines as household earnings remain subdued, but the central bank may largely promote a wait-and-see approach for 2017 as ‘domestic growth is expected to remain supported by strong net immigration, construction activity, tourism, and accommodative monetary policy.’ With that said, NZD/USD may face a kneejerk reaction going through the RBNZ policy meeting should the central bank highlight a potential shift in the path for monetary policy.

At the same time, key speeches by Chicago Fed President Charles Evans, Minneapolis Fed President Neel Kashkari, San Francisco Fed President John Williams, St Louis Fed President James Bullard and Fed Vice-Chair Stanley Fischer may impact the FX market and boost the appeal of the greenback as central bank officials appear to be making a more collective approach to prepare U.S. households and businesses for a December rate-hike. It seems as though the Federal Open Market Committee (FOMC) will stay on course to further normalize monetary policy in 2017 as ‘the Committee judges that the case for an increase in the federal funds rate has continued to strengthen,’ but the 8 to 2 split suggests the permanent voting-members are in no rush to implement higher borrowing-costs as ‘market-based measures of inflation compensation have moved up but remain low; most survey-based measures of longer-term inflation expectations are little changed, on balance, in recent months.’ As a result, Chair Janet Yellen and Co. may largely advocate a wait-and-see approach going into 2017, and the permanent-voting members may continue to favor a ‘gradual’ path in normalizing monetary policy as the central bank remains ‘data-dependent.’ 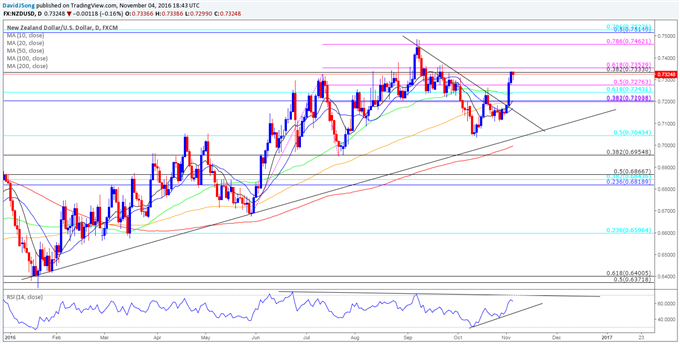 The near-term outlook for NZD/USD remains constructive as the pair breaks out of a triangle/wedge holding-pattern, and the upward trend from back in January may reassert itself over the remainder of year as the exchange rate continues to carve a long-term series of higher highs & lows. Keep in mind, the Relative Strength Index (RSI) has deviated with price as the oscillator preserves the bearish pattern carried over from the summer months, but a topside break in the momentum indicator accompanied by a closing price above the Fibonacci overlap around 0.7330 (38.2% retracement) to 0.7350 (61.8% expansion) may pave the way for fresh 2016-highs especially as the RBNZ appears to be approach the end of its easing-cycle.