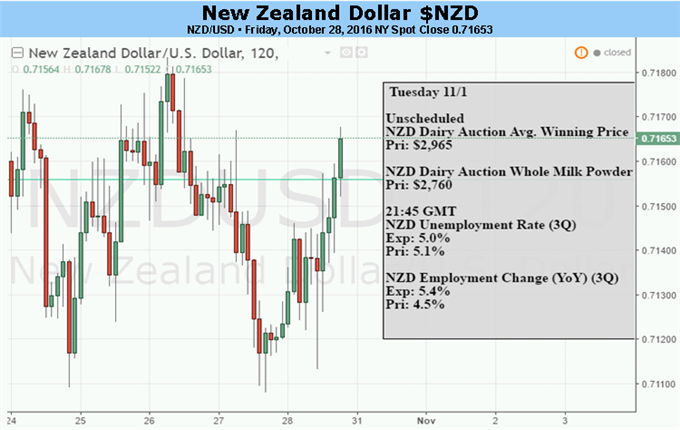 The New Zealand Dollar has been in salvage mode since October 13 as it recovers from a near 6% drop over 26 trading days that began in early September. Much of the data the fuels currency strength have been absent in New Zealand. As an export-dependent economy, a declining Terms of Trade is tough to swallow, and central banks may be encouraged to cut interest rates to help the economy out of a slump. This appears the path the RBNZ will take as there is and ~83% chance of a rate cut via implied probability data from Bloomberg as of October 28, 2016.

The Terms of Trade is the ratio of the price of exports, like dairy subtracted by the price of imports, which are converted into export and import indices. You can also read the Terms of Trade (ToT) as the relative cost of imports priced against exports. An exporting country like NZ would always want a rising ToT because that means they could buy more imports with the same amount of exports. The decline ToT shows that New Zealand is having to pay more for imports because the exports that keep their economy humming along are falling in relative price to the imports they need to buy.

The falling Terms of Trade is why the New Zealand Economy posted their largest Trade Deficit (see image below) this week on record of NZ$-1.436B with exports at NZ$3.47B vs. imports of NZ$4.90b. The rise in import prices is partly attributable to the NZ$273M of aircraft purchases, but the widening trade deficit trend is more worrisome. This data is showing traders to expect action from the New Zealand Central Bank when they meet on November 10. The 6% fall from early September was likely to be welcomed news for the RBNZ who notified markets that they sold NZ$1M in September.

The good news is that inflation may start to pick up, though it will likely continue to be still shy of the 2.0% target. Global headline inflation has perked up on the back of rising Crude Oil prices. However, the global inflation rise will do little to help NZ as their main export is dairy, which Fonterra recently reduced the expected volume by 4.1 over the next season.

The data docket is nearly mute in NZ next week aside from an employment report that is expected to see unemployment remain at 5.1% The New Zealand Dollar could continue to hold up relatively well even in a possible risk-off environment. For this to take place, the data needs to hold up well and next week should allow us to see whether the NZD outpaces other high-yielders. 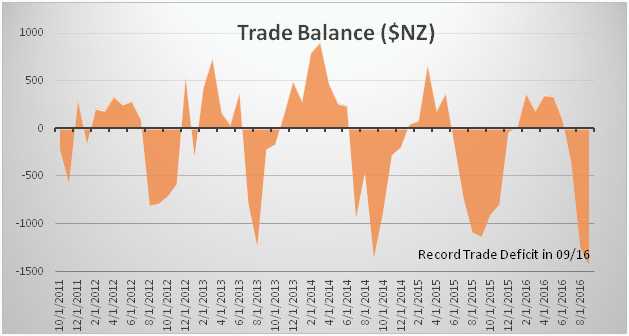