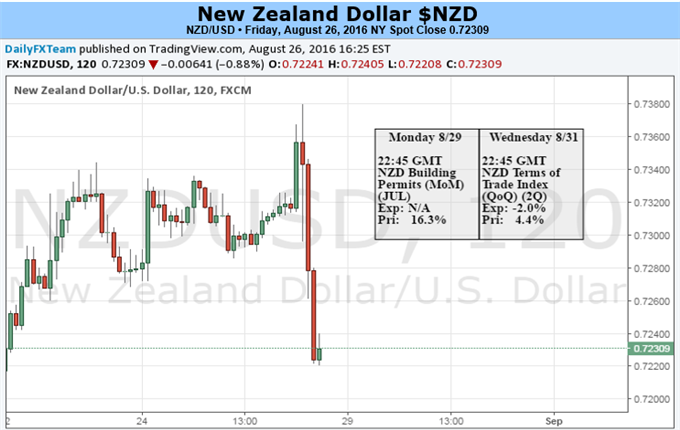 The New Zealand Dollar has lost the pace of its recent rise, but the trend remains definitively higher. Economic data continues to be more positive than economist’s expectations as even the recent 25bp rate cut was less than some that expected a possible 50bp cut. The strong economic performance in addition to the higher relative yield of New Zealand Assets is still the highest in the G10, and as we’ve seen the global hunt for yield cannot resist New Zealand.

The week was somewhat diverse with economic results with a worse than expected Trade Balance of N$ (433m) due to a smaller than anticipated exports, which many will blame on the resilient NZ Dollar. However, a positive development came on Thursday when Fonterra Cooperative group raised its forecast milk payout. In a best case scenario, Fonterra Group is looking for a reduction in global oversupply. Fonterra Chairman John Wilson noted that, “Current global milk prices remain at unrealistically low levels, but have started to improve as global demand and supply continue to rebalance.”

Next week’s economic focus will be on Building Permits, which had a prior monthly reading of +16.3% followed by the ANZ Business Confidence Index. Given the migration boom in New Zealand, and the rise in Milk Prices, we could see both readings beat the prior readings and continue the trend of positive economic surprises in New Zealand. has tended to outperform other economies. When looking at Economic Surprises over the past 3-months, the New Zealand Economy has been in line with expectations on average.

From a technical perspective, it’s worth keeping an eye on the 0.7350 level, which the price of NZD/USD has failed to overcome. Much focus is on the US Dollar into the Kansas City Fed’s Annual Jackson Hole Symposium. A more dovish than expected Janet Yellen, and a break above 0.7350 could signal the beginning of the next big move higher in NZD/USD. However, a breakdown below 0.7200 could show that a shift has happened in the market that would lean toward a weaker NZD and/ or strong USD that could eventually bring us below 0.7000.

For now, it appears the trend of high-yielding currencies going bid will continue despite the threats from the RBNZ to cut again this year. It appears the yield is preferred today over the threat of a possible rate cut tomorrow. 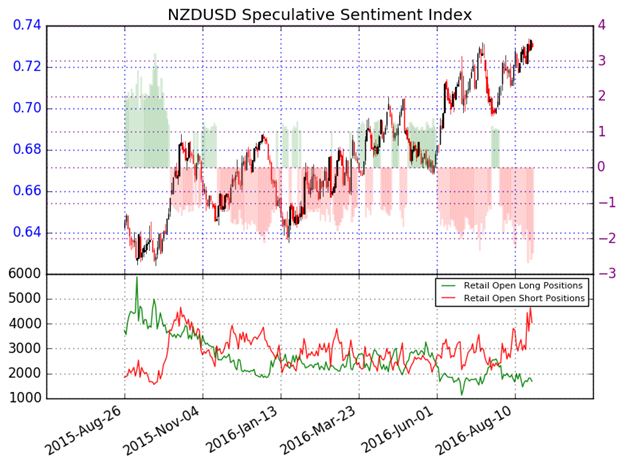 We use our SSI as a contrarian indicator to price action, and the fact that the majority of traders are short gives signal that the NZDUSD may continue higher. The trading crowd has grown less net-short from yesterday but further short since last week. The combination of current sentiment and recent changes gives a further mixed trading bias.