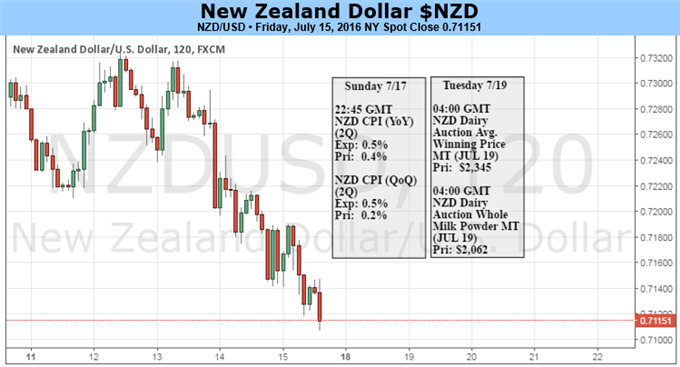 For a majority of the year, New Zealand Economic Announcement have surpassed economists’ expectations. Such positive surprises have allowed NZD also to gain against many of its commodity currencies brethren. While the calendar was light this week, traders turned focus to an impressive BusinessNZ Manufacturing Reading of 57.1 (Above 50 shows economic expansion,) and a strong rebound in Food Prices from -0.5% MoM to +0.4% MoM. Per REINZ, House Sales YoY did slow, but price appreciation of homes sold continues to rise.

Despite the stable data and continued resilience of the commodity sector, there is still an expectation of a rate cut. However, we saw last week the Bank of England (who was widely expected to cut post-Brexit,) and the Bank of Canada hold as the economic situation did not yet warrant such aggressive actions. The next RBNZ meeting where there is a priced-in probability of cutting 25bps to take the rate from 2.25% to 2.00% is August 11. Currently, the Future Implied Discount Rate isn’t pricing in more than one cut over the next year and a half, and a rate rise is not expected over the next year and a half by over 95% of market participants.

The big print next week that could shift the scales of a priced-in move by the RBNZ is 2Q CPI QoQ. The prior read of 0.2% is expected to get a boost thanks to migration, which has influenced housing toward 0.5% QoQ. A beat, which has been the trend, would align with the NZD/USD spot price showing a likely continuation of the 7-week uptrend. Possible price support can be anticipated around the 34-DMA (where we’ve traded above since early June) at 0.7085. Below there, traders should keep an eye on 0.6897, which is the 100- DMA.

In addition to the upcoming CPI print, the recent China GDP could align with a further flight of global capital into New-Zealand’s Bond Market. While the correlation is messy, NZ 10-Yr Bonds have seen their yield fall (Yields trade inversely to price) over the last 3-months from 2.89% down to 2.21 % this week. That is a fall of ~25% in yields as the hunt for yield may have found a friend in the New Zealand Bond Market. Ironically, this may put further pressure on the RBNZ to hold or even discuss raising rates if the property price appreciation gets too far out of hand, as many argue it already has.

NZDUSD Sentiment Puts The NZD Bears To the Test