The New Zealand Dollar hit 2016 highs this week as the commodity train continued to roll on the back of an increasing China Demand. Unfortunately, spot NZD/USD ended the week on a soft note after falling for three straight days. The New Zealand dollar benefits both from trade flow of commodity-rich countries as well as the capital flow for investors seeking higher yielding government debt.

Since mid-Q1, We’ve continued to see a steady appreciation in risk markets like stocks, commodities like US Oil and commodity currencies like the New Zealand Dollar to rally to new highs. In addition to the rally, a world of panic among financial markets in the first month and a half of the year has completely flipped on the back of the ever weakening US Dollar.

Last week started off strong for the Kiwi with a sharp rise in the Dairy Auction for Whole Milk Powder coming in at $2,156 per ton vs. prior auction outcome of $2,013 for a 2.5% price increase. This positive surprise further lifted the New Zealand Dollar to 10-month highs and would eventually go on to trade at 0.7053 before dropping back toward 0.6850 to end the week. The rise was also in contrast to the March 8 forecasted milk payout by Fonterra to fresh nine-year lows in one of the prices of one of the nation’s most prized commodities.

This week, the major release is Thursday morning’s (U.S. Wednesday afternoon) Reserve Bank of New Zealand Rate Announcement. While the RBNZ is still expected to cut later this year once more, no economists surveyed expect a cute on April 27. Therefore, with rates staying around 2.25%, anything we hear from Wheeler that validates a one-cut view in the near future or now sees that as unnecessary will likely add to the volatility. Some traders have warned that the recent 10-month high in the Kiwi could bring out a more dovish than usual Wheeler. Such a case in light of asset market gains and USD weakness would likely favor buying other commodity currencies against the NZD, such as AUD/NZD or selling NZD/CAD.

Overshadowed by the Reserve Bank of New Zealand rate announcement that is expected to keep rates at 2.25% is Trade Balance that economists expect to see a welcomed boost in exports to take the total trade balance from 339m up to 401m. On Friday, we’ll get the MoM Building Permits activity that saw a 10.8 increase in February. Building Permits will likely be viewed only through the commentary provided by Wheeler and the RBNZ on Thursday.

Considering the upcoming data, NZD/USD may find support as it bounces off the trend line from the late January low. If the New Zealand economy remains stable at the same time that the U.S. Dollar goes without a bid, we could soon move closer to 0.7000. 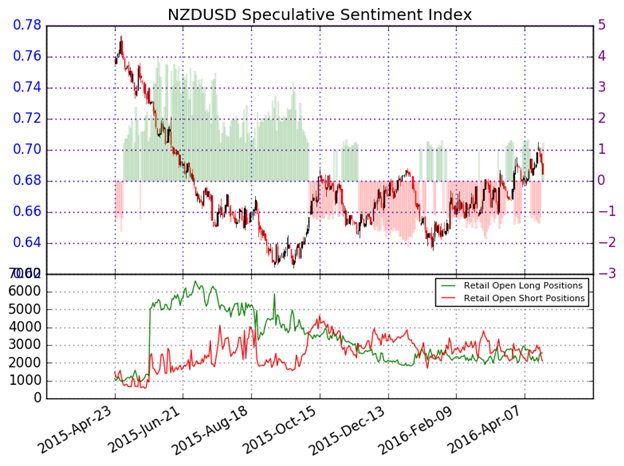 At the end of last week, the ratio of long to short positions in the NZDUSD stands at 1.22 as 55% of traders are long. Long positions are 1.8% higher than yesterday and 17.4% above levels seen last week. Short positions are 16.2% lower than yesterday and 25.6% below levels seen last week. We use our SSI as a contrarian indicator to price action, and the fact that the majority of traders are long gives signal that the NZDUSD may continue lower. The trading crowd has grown further net-long from yesterday but unchanged since last week. The combination of current sentiment and recent changes gives a further bearish trading bias.