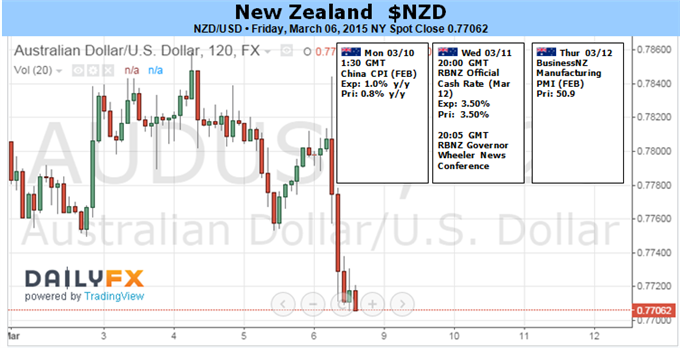 The New Zealand Dollar snapped four consecutive weeks of gains, losing nearly 3 percent against its US counterpart. Selling pressure may continue to swell in the week ahead as a dovish RBNZ monetary policy announcement fuels rate cut speculation even as bets on near-term Fed tightening grow more confident.

The currencywas noticeably stung by January’s about-face in RBNZ rhetoric. The central bank backed away from the hawkish posture on display in December, saying it expected to keep borrowing costs on hold “for some time” and conspicuously noting that future adjustments can take rates “either up or down”.

That seemedto create an opening for the possibility of easing where one was not previously apparent. The Kiwi responded, punctuating two weeks of pre-positioning for a dovish shift with a drop to the lowest level in four years against the greenback. A cautious correction followed, seemingly fueled in equal parts by uncertainty on the US policy front amid disappointing data outcomes and a broader swell in risk appetite.

Sellers returned with a vengeance last week. The RBNZ signaled it is looking for ways to isolate problem areas in the housing market, suggesting it will opt for a surgical approach to cool activity over the blunt instrument of rate hikes. Meanwhile, a strong US payrolls reading fueled a palpable hawkish shift in traders’ Fed rate hike outlook. The report likewise fueled risk aversion, suggesting the prospect of stimulus withdrawal has emerged as a source of worry once again.

The markets don’t expect an outright policy change from the RBNZ. Indeed, priced-in expectations place the probability of a rate cut at a mere 4 percent. Economic news-flow has soured since January’s sit-down however, leaving room for Governor Wheeler to rhetorically build the foundation for a possible downward shift in borrowing costs at subsequent meetings. If that cements probabilities of a cut some time over the next 12 months in the minds of investors, the Kiwi is likely to suffer.

On the US data front, excitations point to a rebound in retail sales and a pickup in consumer confidence (as tracked by a University of Michigan survey). Such outcomes may further bolster Fed tightening bets, weighing on sentiment and amplifying perceptions of the policy divergence between the US and the rest of the G10. Needless to say, that bodes ill for the Kiwi in its own right. It would hurt more so if it came against the backdrop of softening yield prospects at home.