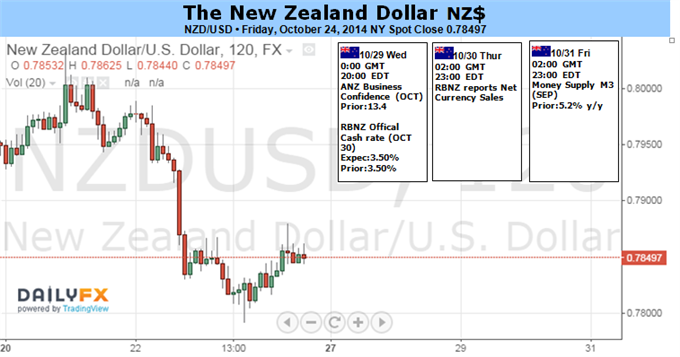 The New Zealand Dollar is in for a volatile period in the week ahead as a hefty dose of domestic fundamental event risk is compounded by high-profile macro-level developments. On the home front, the spotlight is on the RBNZ monetary policy announcement. September’s outing marked a shift into wait-and-see mode after four consecutive rate increases. The central bank is widely expected to maintain the benchmark lending rate unchanged again, putting the policy statement under the microscope as traders attempt to infer where officials will steer next.

Last month, the RBNZ argued that while “it is prudent to undertake a period of monitoring and assessment before considering further policy adjustment…some further policy tightening will be necessary.” Since then, CPI inflation has plunged to the weakest in a year while the exchange rate – a perennial source of concern over recent months – arrested a three-month decline and began to recover. This may prompt the central bank to withdraw language signaling renewed rate hikes are on the horizon after the current “assessment period” runs its course, an outcome which stands to undercut yield-based support for the New Zealand Dollar and send prices lower.

Externally, the central concern preoccupying investors is the ability of a resurgent US economy to underpin global growth, offsetting weakness in China and the Eurozone. That puts the FOMC monetary policy announcement in the spotlight. Janet Yellen and company are widely expected to issue one final $15 billion reduction in monthly asset purchases to conclude the QE3 stimulus program. The probability of a surprise extension seems overwhelmingly unlikely. That means the announcement’s market-moving potential will be found in guidance for the timing of the first subsequent rate hike inferred from the accompanying policy statement.

Recent weeks have witnessed a moderation in the Fed tightening outlook as global slowdown fears encouraged speculation that the central bank will want to safe-guard the US recovery from knock-on effects of weakness elsewhere by delaying normalization. Indeed, fed funds futures now reveal priced-in expectations of a rate hike no sooner than December of next year, far later than prior bets calling for a move around mid-year. A change FOMC statement reflecting renewed concerns about persistently low inflation would validate this shift. Alternatively, a restatement of the status quo would hint the markets’ dovish lean has over-reached, triggering a readjustment and putting pressure on the Kiwi. Considering the Fed’s steady hand through the first-quarter US slowdown, the latter scenario seems more probable.