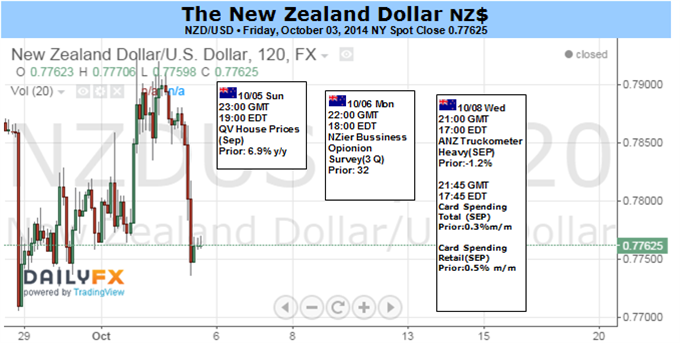 The medium-term outlook for the NZD/USD remains bearish as the Reserve Bank of New Zealand (RBNZ) sticks to a neutral policy stance and retains the verbal intervention on the New Zealand dollar, but the pair may face a larger correction in the days ahead should the fresh back of central bank rhetoric coming out of the Federal Reserve drag on interest rate expectations.

The purchasing manager indices coming out of China during the first full week of October may have a greater impact on the kiwi amid the minor data prints in New Zealand, and a further slowdown in the world’s second-largest economy may dampen the appeal of the higher-yielding currency as it curbs the prospects for global growth. As a result, market participants may continue to look towards the safety of the U.S. dollar as the Federal Open Market Committee (FOMC) is widely expected to halt its quantitative easing (QE) program later this month, but it seems as though the central bank remains in no rush to move away from the zero-interest rate policy (ZIRP) as price growth continues to lag.

Despite the bullish U.S. dollar reaction to the upbeat Non-Farm Payrolls (NFP) report, we may see the group of Fed doves (Narayana Kocherlakota, William Dudley, Charles Evans and Daniel Tarullo) talk down interest rate expectations as weak wage growth continues to cast a subdued outlook for inflation. The prepared remarks may undermine the bullish sentiment surrounding the greenback should the central bank officials highlight the ongoing slack in the real economy, while comments from central bank hawks Richard Fisher and Charles Plosser may largely be ignored as it seems as though the two will continue to be the lone dissenters in 2014.

With that said, the deviation in the policy outlook between the Fed and the RBNZ should continue to dictate price action over the remainder of the year, but the technical outlook highlights the risk for a near-term bounce as the Relative Strength Index (RSI) comes off of oversold territory and breaks out of the bearish momentum carried over from late-July. In turn, we may see a bottoming process ahead of the 0.7700 handle, and we will continue to look for a series of higher highs & lows in the NZD/USD as long as it trades above the September low (0.7706)