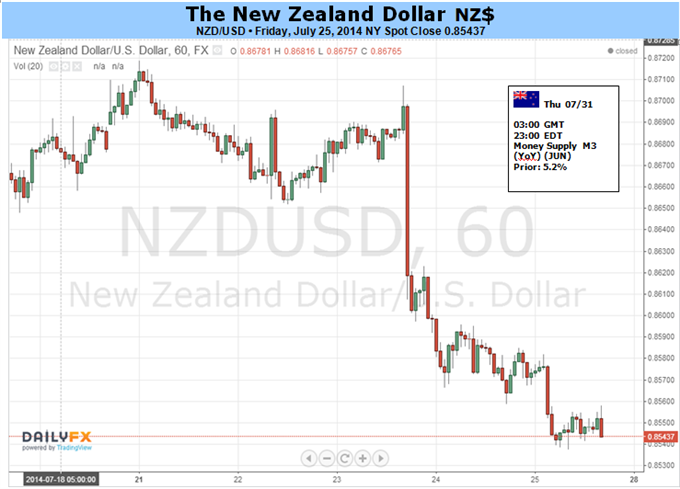 New Zealand Dollar May Continue Lower on US Economic News-Flow

The New Zealand Dollar proved to be the worst-performing currency last week, sliding over 1.5 percent against its US counterpart. The move lower tracked a dramatic decline in New Zealand’s benchmark 10-year bond yield, pointing to eroding RBNZ interest rate hike expectations as the catalyst behind the selloff. A pre-emptive reversal began early in the month amid murmurs of a forthcoming pause in the central bank’s tightening. These fears were confirmed last week as Governor Graeme Wheeler signaled that rate hikes are on hold for time being, sending the currency to the lowest level in nearly two months.

Looking ahead, a lull in homegrown event risk will bring external macro-level trends into the driver’s seat. That puts the spotlight squarely on the US, where the docket is so overstuffed that the FOMC policy announcement may actually prove least market-moving among the high-profile releases. Janet Yellen and company appear determined to continue tapering QE until the program is wound down in October. That much is probably priced in already, with the markets now focused on the length of the time gap between the end of asset purchases and the first interest rate hike. That means familiar cautious optimism may not yield much in terms of volatility.

Meanwhile, an extensive supply of heavy-duty activity data will speak more directly to how quickly overt tightening may occur. The spotlight will on second-quarter GDP figures and July’s Employment report. The former is expected to show that economic growth snapped back aggressively following the seemingly weather-driven slump in the first three months of the year. The annualized growth rate is seen printing at 3 percent after a dismal 2.9 percent drop in the prior period. As for the jobs report, economists are looking for a 231,000 increase in nonfarm payrolls. That would amount to the sixth consecutive month above the closely-watched 200k threshold, making for the steadiest such run in job creation in over a decade.

The significance of Fed monetary policy to supporting risk appetite in the post-crisis rebound from 2009 lows is hardly a controversial subject at this point. That means news-flow arguing for stimulus to be withdrawn relatively sooner than the second half of 2015 – seemingly the markets’ baseline scenario – may force a selloff across sentiment-sensitive assets. Needless to say, the Kiwi’s yield advantage against its G10 FX counterparts puts it firmly on the risk-on side of the spectrum, making it highly vulnerable to selling pressure if broad-based liquidation takes hold. -IS