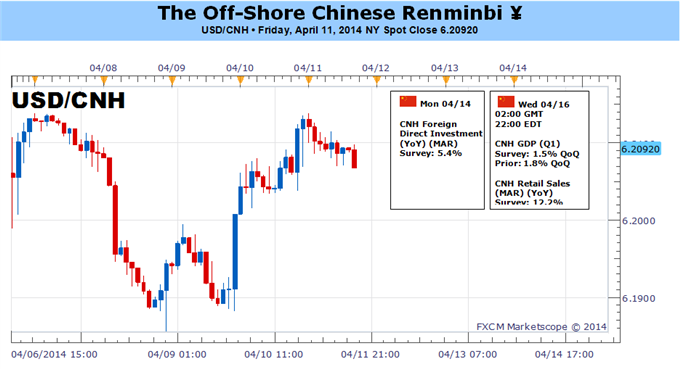 Fundamental Forecast for the Renminbi: Neutral

Open an FXCM account and trade the Renminbi (USDCNH)

The Chinese Yuan (also called the Renminbi) attempted a recovery in its opening move of this past week, but the currency would ultimately end back up on the cusp of 12-month lows against its US counterpart. No doubt risk trends played a significant role in this failed attempt at liftoff. With global equities on the lam, the frequent financial headlines lamenting China’s slowing growth, impending wave of defaults and asset bubbles are taken more seriously. Will the international market’s scrutiny increase this week as speculators come under pressure? Will heavy economic docket alter the Yuan’s position on the global scale? These are the question we should ask to determine whether USDCNH will mark its break above 6.2500 or below 6.1750.

Historically speaking, USDCNH maintains a strong negative correlation to the S&P 500. In other words, the Chinese currency has risen consistently alongside the ‘risk trends’. Fundamentally, this makes sense. Investors seeking higher return on their capital put their money to work in China where relative returns mirrors the country’s astounding growth rate. Naturally, when the tide goes back out on sentiment, funds are repatriated to seek stability. However, the situation is a little more unique with China.

First and foremost, there is an issue with the scale of risk aversion. While we have seen genuine stumbles in exuberance these past years, we haven’t seen anything on the scale that would shake highly leveraged positions nor the less liquid investments in China. To turn the Yuan into a more sensitive emerging market currency (like the South African Rand, Brazilian Real or Indonesian Rupiah), we need to see a greater sense of conviction.

Another unusual aspect that has kept this pair from deviating from its long-term depreciation (Yuan gain) are the external controls – and the speculative distortion that has. The PBoC sets the USDCNY reference every day and doesn’t allow fluctuation greater than 2 percent around its band. Under the assumption that Chinese authorities will continue to loosen the exchange rate as it approaches ‘fair value’, investors feel particularly confident about investing in the country expecting stability. That has led to what many call the ‘China Carry Trade’. Yet, debt defaults, asset bubbles and curbs on capital outflow can quickly work against those same investors.

A more traditional route to volatility – event risk – may be tempted in the week ahead. China’s calendar is dotted with foreign reserves, lending, foreign direct investment (all without specific days for release) as well as precisely timed business activity, fixed assets, retail sales and industrial production figures for March. However, the big ticket item will certainly be the first quarter (1Q) GDP report. The consensus is for the country’s pace of growth to slow from 7.7 percent in the final months of 2013 to 7.3 percent. The Premier and Central Bank Governor have both said that would be within the tolerable band, but will investors be so confident as defaults mount and officials deny fresh rounds of stimulus? - JK