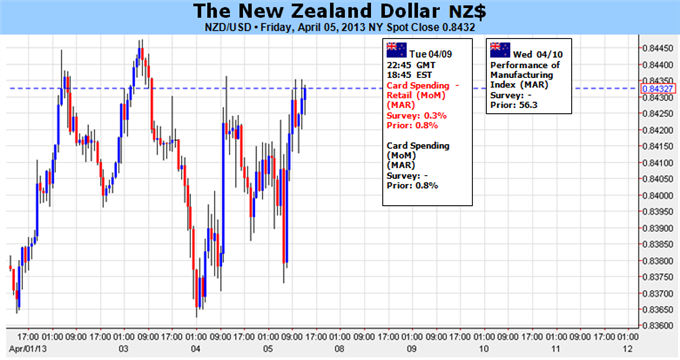 The New Zealand Dollar gained for the fourth consecutive week, rallying by 0.8 percent against the Greenback from a week ago. The Kiwi’s performance was overwhelming against the Japanese Yen, against which it advanced 9.2 percent, as the Bank of Japan launched an unprecedented stimulus plan to massively expand its balance sheet. As investors continue to look for better returns outside Japan, the Kiwi may continue to climb towards modern peaks near ¥97..

Looking forward, the main events to Kiwi come from Chinese trade figures which are scheduled to be released between April 9 and 10. “New Zealand’s relationship with China is growing in importance and strength as the two countries cooperation and exchanges”, New Zealand Prime Minister John Key said ahead of his visit to China starting later this week. Exports to China from New Zealand climbed more than three times to 6.9 billion NZ dollars last year after the two countries signed a free trade agreement. As the only developed country to have a free trade agreement with China, New Zealand benefits a lot from the stabilization and development in China’s economy.

According to a survey polled by Bloomberg News, China’s March import is expected to rise by 6.0 percent following a drop of 15.2 percent in previous month. That means Chinese individuals and corporations could expand their consumption and purchase more overseas including from New Zealand. Based on the historical tie between the two countries, the Kiwi may continue its rally against other majors in the following week.

On the domestic front, the Performance of Manufacturing Index report is due on Wednesday. New Zealand’s manufacturing sector has improved over the past five months with index readings above 50. Increased activity in the production is usually a precursor to economic expansion and inflationary pressures. If the PMI report signals continuous recovery in business sentiment, the Kiwi could remain elevated into the end of the week.

Another important report in the Australian March Unemployment report will be published on Thursday. Change in hiring is forecasted to fall slightly following a large increase in previous month. Sustained improvements are needed to spur consumer spending and boost economic growth in New Zealand’s largest business partner. If the employment readings come in better than expected, we suspect there could be some upside support to the kiwi. -RM