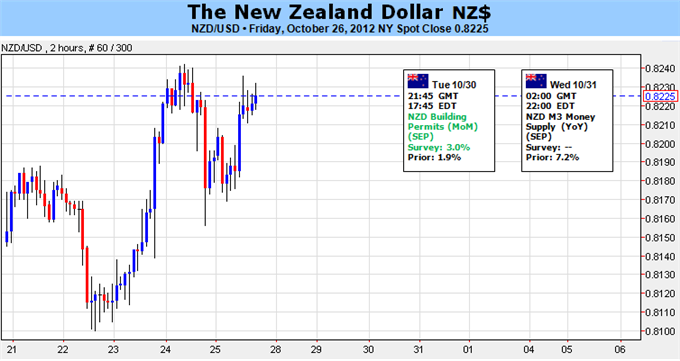 The New Zealand Dollar had a strong week, surprisingly finishing best among the majors, as the Reserve Bank of New Zealand kept its key interest rate on hold at 2.50%, bucking some dark horse expectations for a rate cut mainly due to regional weakness in Australia and China, both of which are vital trading partners for New Zealand. But with risk-aversion prevalent, as confirmed by the drop in precious metals and equity indexes, and some contradictory commentary from the new RBNZ head honcho, the Kiwi’s gains weren’t able to extend further. Despite the Kiwi’s outperformance this week, we remain neutral, though weighted to the upside.

On exogenous influences: while the forecast is sunny at home, storm clouds are brewing abroad (not dissimilar to Hurricane Sandy approaching New York City). There’s little New Zealand can do either – its growth is largely dependent on a robust global economy supported mainly emerging Asia. What we’ve seen is that Chinese data is trending higher recently, which negates this influence for now, barring a major data miss down the line.

With no data, then, the Kiwi should be looking higher. But two things are hurting its prospects. First, Europe. Back in February, and as noted numerous times in this forecast over the past few months, Moody’s Investors Service published a report showing that the New Zealand economy stood increasingly susceptible to Euro-zone risks, mainly due to their financial sector. This represents a great deal of uncertainty for the next few days as well (see more: Euro Fundamentals Increasingly Negative, but Outlook Hinges on Spain).

An outside influence will be what new RBNZ Governor Graeme Wheeler says as a follow-up to some curious comments this week. After the RBNZ held its key rate, Governor Wheeler said that the “Reserve Bank has scope to lower interest rates if needed,” and even mentioned quantitative easing and intervention. While this is unlikely, as he stated, it’s a scary idea that another major currency would be befallen to a massive balance sheet expansion, thus making it unappealing and more unpredictable (see: Japanese Yen, Swiss Franc, and US Dollar).

Overall, global risk trends aren’t firm enough to offer a clear picture for the week ahead, and we thus are choosing to take a “neutral” bias once more. We still believe Chinese data is firming up in the short-term, which should help all regional currencies and the commodity currencies (both of which apply to the New Zealand Dollar). However, the Euro-zone presents a significant risk, and alongside a very confusing RBNZ, we maintain a neutral outlook for the coming five days. – CV