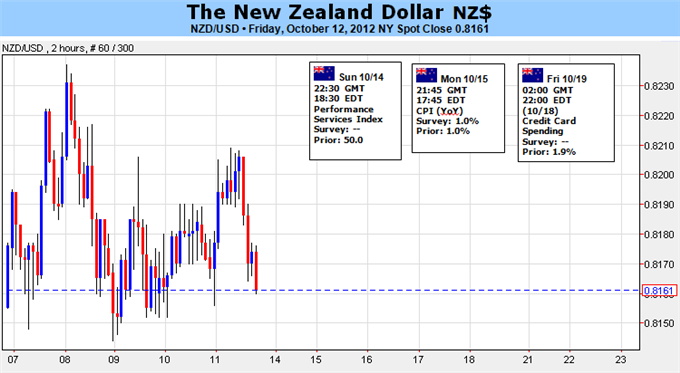 Nevertheless, there were two major themes behind the Kiwi’s decline: weaker agricultural commodity prices (as the Australian economy is heavily geared towards mining, the New Zealand economy is tilted towards agriculture, farming, and fishing); and weak sentiment building around Europe. For the week ahead, considering that the New Zealand Dollar only has one major data release due, we suspect these two themes will continue to drive the Kiwi, with the latter weighing or lifting more significantly. And for that, our bias is neutral to bullish.

In terms of data this week, only the Consumer Price Index for the third quarter is noteworthy. According to a Bloomberg News survey, inflationary pressures increased to +0.5% quarter-over-quarter from +0.3% q/q, while the yearly-rate held steady at +1.0%. Given the slowing Australian economy, to which the New Zealand economy is heavily exposed, and the slowing Chinese economy, to which both the Australian and New Zealand economies are exposed, it would not be a surprise to see a slightly softer figure. On the flipside, agricultural prices have been higher recently, which could lift the figure. We’re neutral headed into this event as the expected looks reasonable. But this will hardly affect the Kiwi in the grand scheme: the Euro-zone crisis will have a far greater influence.

To wit: On February 6, Moody’s Investors Service said that the New Zealand economy was among the “most exposed” to the crisis, further noting that its banking system (along with Australia’s and Korea’s) is “more vulnerable to the first-round impact of a further worsening of the euro area crisis than other systems in Asia Pacific.” Indeed, since mid-March, when the Euro-zone crisis started reheating, New Zealand 5-year CDS have climbed over 27 percent, from 65.98 to 84.16 at the time of writing today. This is still much improved from its peak this year, when it climbed as high as 109.00 in early-June.

With another Euro-zone Summit this week – one that could prove to be very explosive, as I explain in this week’s Euro fundamental forecast – the New Zealand Dollar could see a major lift as short-term credit concerns ease. If the Euro-zone Summit yields reasonable results – including a Spanish bailout – the New Zealand Dollar could have a strong week. –CV