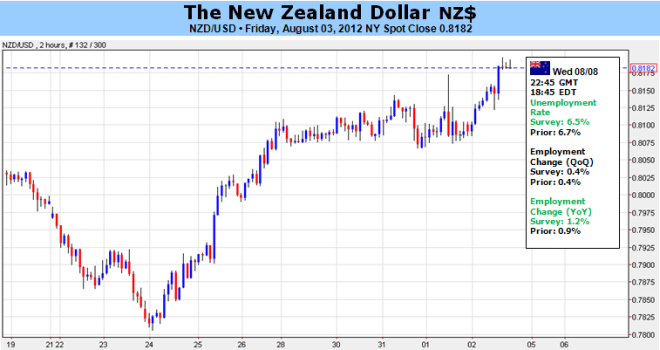 The New Zealand dollar rallied to a three-month high against its U.S. counterpart as market participants increase their appetite for risk, and the high-yielding currency may track higher in the week ahead as the economic docket is expected to instill an improved outlook for growth and inflation. Indeed, wage growth is anticipated to expand at a faster pace in the second-quarter, while employment is projected to increase another 0.4% during the same period as the economic recovery gathers pace.

At the same time, the jobless rate is expected to fall back to 6.5% from 6.7% in the first quarter, which would mark the lowest reading since 2011, and a slew of positive developments may spark another short-term rally in the NZDUSD as it spurs speculation for a rate hike. According to Credit Suisse overnight index swaps, market participants see the Reserve Bank of New Zealand keeping the benchmark interest rate at 2.50% over the next 12-months, but we may see central bank Governor Alan Bollard show a greater willingness to lift the cash rate off of the record-low as the rebuilding efforts from the Christchurch earthquake is expected to boost economic activity over the medium-term. However, Standard and Poor’s warned about the region’s reliance on international financing even as the group maintained its AA credit rate for New Zealand and held a stable outlook for the region, and we saw the agency encourage the government to ramp up private sector savings in an effort to bring down the current account deficit.

As the NZDUSD threatens the downward trend carried over from 2011, the bullish breakout in the exchange rate may spark a run at the April high (0.8317), but we will be keeping a close eye on the relative strength index as it approaches overbought territory. At the same time the rising slope in the 10 and 20-Day SMAs points to higher prices as they break away from the 100 and 200-Day moving averages, and we may see the kiwi-dollar continue to retrace the decline from earlier this year as the fundamental outlook for the region improves. - DS