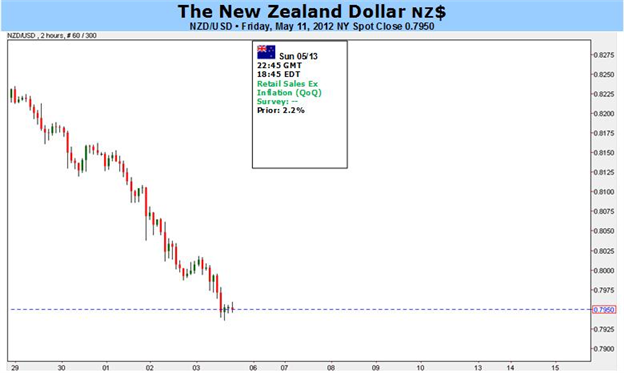 The New Zealand Dollar had another poor week, finishing last among the majors in terms of overall performance, depreciating by 1.71 percent against the top performer, the US Dollar. The Kiwi’s performance was also underwhelming against the Japanese Yen, to which it lost 1.60 percent, and against the recently-bullish British Pound and Canadian Dollar (diverting hawkish monetary policy), to which it shed 1.22 percent and 1.28 percent, respectively. As Chinese data continues to disappoint and Euro-zone concerns continue to mount, the New Zealand Dollar has been of the worst performing major currencies over the past few weeks; and with little resolution in sight for either major issue, we maintain our bearish bias on the New Zealand Dollar for the next five days.

With respect to the economic calendar, little comes by way of fundamental event risk. The main event to watch comes at the start of trading at the Sunday open, when retail sales data for the first quarter is due. After a modest gain of 2.2 percent in the fourth quarter of 2011, retail sales have taken a step back, contracting by 0.5 percent in the first quarter, according to a Bloomberg News survey. A contraction would be the first such occurrence since the fourth quarter of 2010, when retail sales dropped by 0.4 percent. Recent data out of New Zealand hasn’t been supportive of a stronger Kiwi (but for labor market data, which, despite showing a bump in the unemployment, showed an equal if not more crucial jump in the participation rate), and commentary out of the Reserve Bank of New Zealand suggests that the current monetary policy path is likely to remain on hold. However, like the outlook from last week, our outlook for the Kiwi is bearish for exogenous reasons, mainly rooted in China and Europe.

To reiterate a point raised in last week’s forecast, the New Zealand Dollar’s recent weakness has a lot to do with the decline in Chinese growth. This has hit the Kiwi two-fold. First, as New Zealand’s second-largest export market (12.5 percent in 2011), a drop in demand for foreign goods by Chinese businesses and consumers has and will hurt New Zealand producers of goods and services. On Thursday, Chinese trade figures showed that imports collapsed, gaining 0.3 percent in April against a forecast of 10.9 percent. Furthermore, after this week’s poor data all-around (industrial production, trade figures, price pressures) it’s evident that the Chinese economy has not yet bottomed. Further downside pressure in the Chinese economy will only weigh on the Kiwi going forward.

What has also hurt the New Zealand Dollar in recent weeks has been the Euro-zone crisis. On February 6, Moody’s Investors Service said that the New Zealand economy was among the “most exposed” to the crisis, further noting that its banking system (along with Australia’s and Korea’s) is “more vulnerable to the first-round impact of a further worsening of the euro area crisis than other systems in Asia Pacific.” Indeed, since mid-March, when the Euro-zone crisis started reheating, New Zealand 5-year CDS have climbed over 41 percent, from 65.98 to 93.30 at the time of writing today. If Euro-zone issues persist alongside softening Asia-Pacific growth prospects, the New Zealand Dollar will remain under pressure; and going into a tumultuous weak for the Euro-zone (Greek backlash, potential Italian downgrade), global risk trends lead us to a fundamentally weaker Kiwi for the coming week. – CV