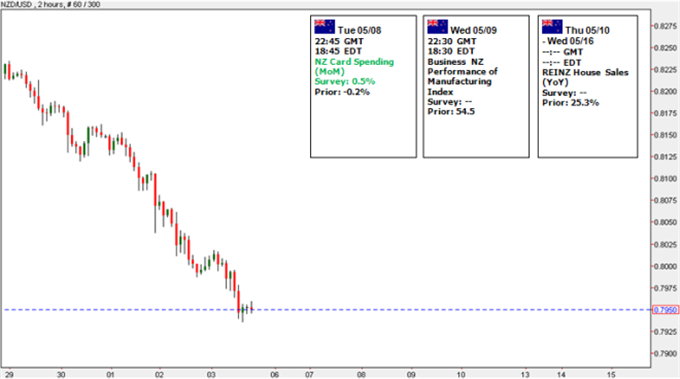 The New Zealand Dollar had a dismal week, finishing last among the majors in terms of overall performance, losing 3.79 percent to the top performer, the Japanese Yen. The Kiwi was particularly weak against the US Dollar as well, with the NZDUSD dropping by more than 3.20 percent. Even against the next weakest performer, the Australia Dollar, the Kiwi still depreciated by 0.54 percent – and this comes after the Reserve Bank of Australia cut their key interest rate by 50-basis points. It is based on the Kiwi’s performance this week, with respect to a light economic docket a deteriorating global risk trends, that we believe the Kiwi is headed lower over the coming five days.

In terms of the data due, our focus lies mainly on Thursday, when the Business New Zealand Performance of Manufacturing Index for April is due. While there is no forecast provided, we do note that the prior print of 54.5 was a decline off of 57.7, the highest such reading since April 2010 (58.3). As noted in the Reserve Bank of New Zealand policy statement accompanying the rate decision during the last week of April, monetary officials are less concerned with the New Zealand economy’s growth picture than they are with a strong Kiwi; in fact, given their comments, they would welcome a weaker Kiwi. With that said, a further contraction in the PMI print is bearish for the Kiwi.

Furthermore, the New Zealand Dollar’s recent weakness has a lot to do with the decline in Chinese growth. This has hit the Kiwi two-fold. First, as New Zealand’s second-largest export market (12.5 percent in 2011), a drop in demand for foreign goods by Chinese businesses and consumers has and will hurt New Zealand producers of goods and services. The same negative influence is also reflected in the declining fundamentals of the Australian economy, which is New Zealand’s largest export market (23 percent in 2011). Thus, weakness in both Australia and China can really hurt the New Zealand economy.

What has also hurt the New Zealand Dollar in recent weeks has been the Euro-zone crisis. On February 6, Moody’s Investors Service said that the New Zealand economy was among the “most exposed” to the crisis, further noting that its banking system (along with Australia’s and Korea’s) is “more vulnerable to the first-round impact of a further worsening of the euro area crisis than other systems in Asia Pacific.” Indeed, since mid-March, when the Euro-zone crisis started reheating, New Zealand 5-year CDS have climbed nearly 27 percent, from 65.98 to 83.64 at the time of writing today. If Euro-zone issues persist alongside softening Asia-Pacific growth prospects, the New Zealand Dollar will remain under pressure; and going into a tumultuous weak for the Euro-zone, global risk trends lead us to a fundamentally weaker Kiwi for the coming week. – CV