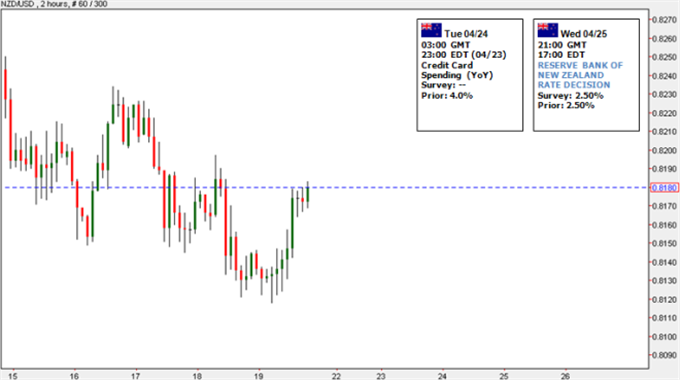 The New Zealand Dollar had a rough, finishing second to last among the majors in terms of performance against the US Dollar, losing 0.50 percent. The Kiwi only outpaced the Japanese Yen which it appreciated by 0.12 percent against. The decline against the buck is the first in four weeks as the Kiwi tracked the broader decline in equity markets throughout the week rather than some optimistic data over the past five days. Now, as we head into the week of the April Reserve Bank of New Zealand Rate decision, in light of global macro developments, we expect the New Zealand Dollar to depreciate in the days ahead.

Whereas the RBNZ was slowly starting to lean towards raising rates a year after having to loosen monetary policy to aid the recovery after the Christchurch earthquakes in February 2011, recent economic data gives impetus to Governor Alan Bollard keeping rates on hold at 2.50 percent for at least the next quarter. Growth figures remained stagnant at the end of 2011, with the fourth quarter growing by 0.5 percent on a yearly-basis. More recently, the consumer price index for the first quarter of 2012 showed that headline inflationary prices remained below the 2.0 percent threshold at 1.6 percent y/y. Although the trade balance figure for February showed a surplus, it came as both exports and imports fells, with the latter experiencing a bigger disappointment than the former to create a positive net exports figure. The bottom line is that the New Zealand economy isn’t exactly beaming signs of overheating that would necessitate a rate hike at the current meeting.

Although the Kiwi was weaker this past week, this has little to do with policy expectations, which remain broadly neutral. According to the Credit Suisse Overnight Index Swaps, there is only a 5.0 percent change of a rate cut at the coming meeting – certainly reflecting the recently disappointing data – and only 9.0-basis points are being priced into the Kiwi over the next 12-months (down from 11.0-bps at the beginning of the week). Given the data and market expectations, we do not believe that the RBNZ will raise rates at the meeting. In fact, if they emphasize the aforementioned data points as reasons to keep rates low, the New Zealand Dollar could fall after Governor Bollard announces April’s policy decision.

Furthermore, adding fuel to the fire, have been the concerns out of Europe. On February 6, Moody’s Investors Service noted that the New Zealand economy was among the “more exposed” to the crisis, further noting that its banking system (along with Australia’s and South Korea’s) is “more vulnerable to the first-round impact of a further worsening of the [European sovereign debt] crisis than other systems in Asia pacific.” As Euro-zone concerns have mounted, New Zealand 5-year credit default swaps have closed this week at their highest level since the first week of February. Between the devolving Euro-zone crisis – one that could take a turn for the worse if investors do not take the G-20 pledge optimistically – and the RBNZ rate decision, our fundamental forecast for the coming week for the New Zealand Dollar is bearish. – CV