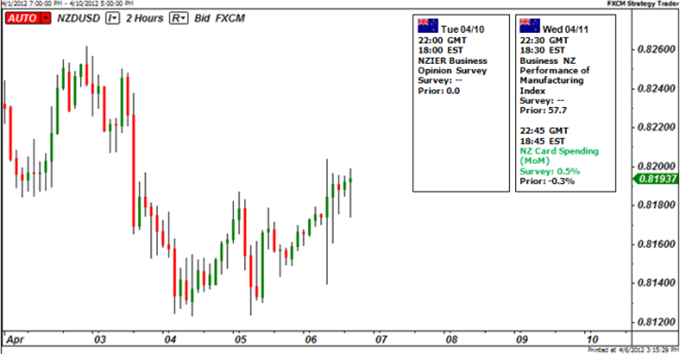 The New Zealand dollar regained its footing going into the holiday trade, but we may see the high-yielding currency come under pressure next week as fears surrounding the sovereign debt crisis drags on risk-taking behavior. Indeed, New Zealand’s reliance on international financing dampens the appeal of the kiwi as the threat for contagion resurfaces, and the ongoing turmoil in the world financial system instills a bearish outlook for the NZDUSD as the region remains vulnerable to external shocks.

The International Monetary Fund said that the Reserve Bank of New Zealand has the scope to lower its benchmark interest rate further ‘to help buffer against a downside scenario,’ and went onto say that the recovery is ‘likely to remain modest’ amid the ongoing slack within the private sector. As the RBNZ sees higher funding costs dragging on the real economy, we are likely to see Governor Alan Bollard maintain a cautious outlook for the region, and the central bank head may continue to talk down speculation for higher borrowing costs in an effort to shield the economy. However, as the central bank remains optimistic about the rebuilding efforts from the Christchurch earthquake, Credit Suisse overnight index swaps continue to reflect expectations for a rate hike in the next 12-months and speculation for a higher interest rate may continue to prop up the New Zealand dollar as market participants weigh the prospects for future policy.

As the NZDUSD maintains the range-bounce price action carried over from the previous month, the kiwi-dollar should continue to track sideways in the week ahead, but it seems as though a downward trending channel is beginning to stake shape as the pair appears to be carving out a lower top around 0.8250. Should the bearish pattern continue to pan out, we would like to see a close below the 200-Day SMA (0.8096) to favor further declines in the exchange rate, and we may see market participants turn increasingly bearish against the NZDUSD should the shift away from risk-taking behavior gather pace. - DS