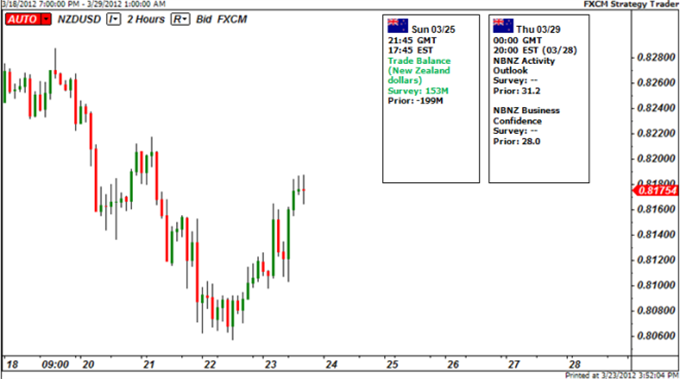 The New Zealand dollar bounced back from a fresh monthly low of 0.8058 as market participants increased their appetite for risk, but we may see the NZDUSD track lower next week as the pair appears to have carved out a major top in March. The high-yielding currency came under pressure as the 4Q GDP report fell short of market expectations, and the event risks on tap for the following week may generate a bearish reaction for the kiwi should the data highlight a protracted recovery for the region.

In light of the weaker-than-expected growth report, market participants see the Reserve Bank of New Zealand maintaining its current policy for most of 2012, and we may see Governor Alan Bollard continue to strike a neutral tone for monetary policy in an effort to stimulate the ailing economy. According to a survey by the New Zealand Institute of Economic Research, a recent poll showed ‘economists expect modest increases in interest rates to begin in late 2012 or early 2013’ amid ‘weak economic growth and contained inflation,’ but we may see interest rate expectations deteriorate further as the outlook for global growth deteriorates. As the slowdown in China curbs the prospects for an export-led recovery, we may see the RBNZ maintain the record-low interest rate for a prolonged period of time, and Mr. Bollard may continue to talk down speculation for higher borrowing costs as the persistent strength in the local currency dampens the fundamental outlook for the region.

Although New Zealand is expected to post a trade surplus in February, the marked appreciation in the New Zealand dollar paired with easing demands may ultimately lead to another deficit, while business confidence may weaken from the previous month as firms cope with the protracted recovery. In turn, we may see the NZDUSD extend the decline from earlier this month, and the pair may come up against the 78.6% Fibonacci retracement from the 2009 low to the 2011 high around 0.7990-0.8000 to test for near-term support. However, as the NZDUSD has yet to close below the 200-Day SMA (0.8093), the rise in risk-taking behavior may push the pair higher going into the following week, and we may see the kiwi-dollar make another run at 0.8400 should the economic docket encourage an improved outlook for the region. – DS