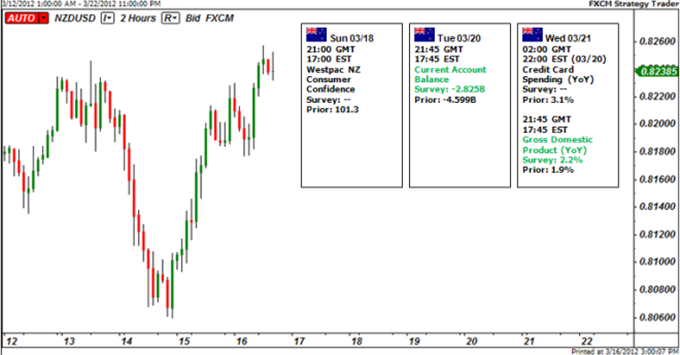 The New Zealand Dollar had another strong week, finishing third among the majors covered by DailyFX Research as it gained 0.36 percent against the U.S. Dollar. As the top performing major currency this year, the Kiwi’s remarkable run against the Japanese Yen continued as well; the NZDJPY is now up 13.12 percent year-to-date (!). Data out of New Zealand was largely supportive of a stronger Kiwi over the course of the week and for the periods ahead, with the housing sector showing signs of growth and businesses becoming rather confident in February (the Business PMI jumped from 50.8 to 57.7).

Looking to the week ahead, there’s really only one thing fundamentally out of New Zealand that could make or break a continuation of the Kiwi’s rally that took foot at the end of the week: the fourth quarter gross domestic product print. The print itself could be confusing, however. On a quarterly basis, the New Zealand economy is forecasted to have grown by 0.6 percent, according to a Bloomberg News survey. This would be a slight slowdown from the 0.8 percent quarterly rate experienced in the third quarter. Indeed, if growth is slowing, the Kiwi is likely to face downside pressure.

On the other hand, the year-over-year print is much more inspiring. According to a Bloomberg News survey, growth on a yearly basis is forecasted to accelerate to a 2.2 percent rate from 1.9 percent in the third quarter. Thus, while growth in the near-term is relatively slower, overall, the New Zealand economy is stronger to where it was a year ago – and that is always a welcomed development.

Ideally, for a major NZDUSD rally to ensue, I’d like to see both the quarterly and yearly prints beat their forecasts (worst case scenario are misses to the downside on both time frames). Perhaps I can’t have my cake and eat it too; in that case, I’d be looking for a stronger quarterly reading to kick-off another leg higher by the Kiwi. If growth is accelerating at a quicker than expected rate in the near-term, short-term yields will rise as well. This fits neatly in with what happened to the U.S. Dollar this week.

After the Dow Jones FXCM Dollar Index hit its highest level since October 4 on Thursday, the U.S. Dollar has tumbled massively the past two sessions, closing the week at its lows. Technically, this is a major red flag for bulls. The weekly candle finished as a Shooting Star, a sign of a major reversal and potential top in the index. In context of the bigger picture, this suggests that markets are on the verge of a major rally in higher yielding currencies and risk-correlated assets, including the New Zealand Dollar. – CV